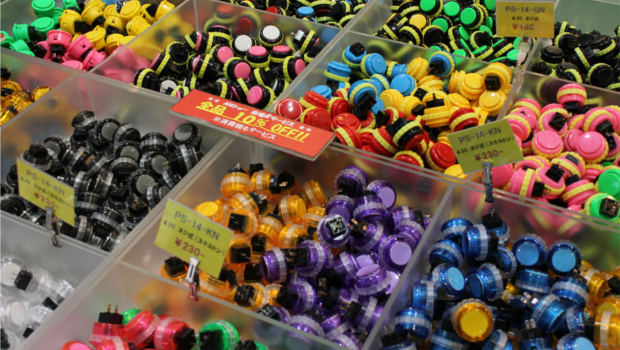 Arcades are a big part of what I love about Japan. From Taito’s five-story monster arcades to the retro ones hidden away in an Akihabara alley, Japanese arcades fascinate me and make me upset most Americans will never experience a multi-screen majesty of Darius Burst . What makes me even sadder is seeing the current trends in Japanese arcades and how they continue to diminish year-by-year. Nowhere was this more visible than at this year’s Amusement Machine Show.

Although JAMMA 2011 brought out all the business men last week in Tokyo, this week saw the Amusement Machine Show bring together families and Japanese arcade-goers. While dedicated gamers traversed the crowded Tokyo Game Show in a hall nearby, I snuck into AMS and checked out pretty much nothing.

Visit any major arcade in Tokyo and you’ll have to go up two-to-three flights of stairs until you get to the good stuff (i.e. videogames). UFO games, or crane games to Westerners, photobooths, virtual card games, and children’s games have far surpassed the popularity of more traditional arcade games.

The AMS show floor reflected this with only a handful of videogames present. Most of which were fighting games, which have thrived while beat ‘em ups, shmups, platformers and other genres have fallen in popularity.  While I searched the floor for a new Exception or Trouble Witches only to be let down, I did find a couple neat games worth discussing.

This is a light gun game designed with 3D in mind (glasses required). It’s not the first cabinet of its kind to apply 3D (that doesn’t really look that great). It’s more notable for its aesthetic and graphics. It’s like Silent Hill meets House of the Dead, with genuinely creepy enemies and stages. I’m not sure if psychological scares are well suited for an arcade game, but I’m definitely intrigued in playing this one.

Taito do some pretty crazy things with their cabinets and Magical Music is a perfect example of this. It’s basically Elite Beat Agents, except instead of using a stylus you use two giant batons to touch the giant arcade screen. The music isn’t anything special and the game seems too kid-friendly (as most of Taito’s offerings are these days). If nothing else, it could make for some good drunken gaming after next year’s TGS.

Sega’s sequel to its rad Ghost Squad light-gun game is shaping up to look like a worthy follow-up. The gun model feels and looks great; not to mention the force feedback is pretty powerful. The game itself is really fun, filled with lots of variation thanks to the action button and unique scenarios (hostage rescues, boss fights). During various scenarios, you’ll be given an option to throw a grenade or scan a room via the action button. I love how you scan rooms for targets and charge in, like a Call of Duty breach. In fact, a lot of the game makes it feel like a light-gun Call of Duty with just a dose of Japanese absurdity.

You can look forward to these three arcade cabinets at your local theater … well, probably never.