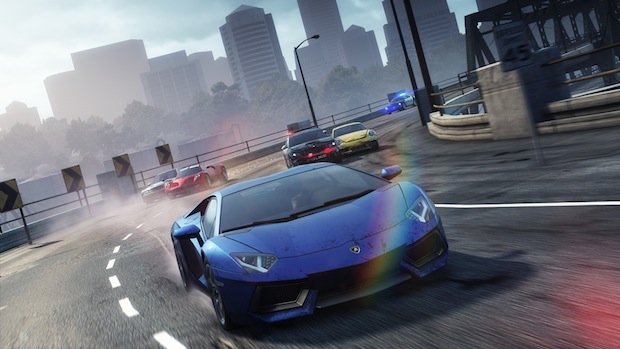 But I was absolutely certain I’d score 1st in the 8-player multiplayer room they have set up here at Tokyo Game Show 2012. In covering this event for the last half decade or so I’ve learned that Japanese attendees of this trade show are typically not the best racing game players. And yesterday, while watching the previous group of players while waiting in line for my group’s race, I had no problem openly mocking their poor cornering and takedown skills.

Perhaps I was a bit too cocky.

It’s not that I’m that good at Need for Speed Most Wanted. I’m OK, but it helps that this game plays a lot like one of my favorites, Burnout Paradise. And I’ve got that down. The multiplayer in Most Wanted has you openly cruising the open city, looking for takedowns and other trouble until a challenge pops up. When that happens, things like point-to-point races and ramp jump contests have all players pulling out all the stops to earn the most Speed Points for the mini event, and in total. It makes for a really enjoyable sandbox that constantly dishes out challenges and rankings, keeping things lively and highly competitive. The racer with the most SP at the end of the match takes 1st, and in this case a really great t-shirt.

I got a little promo card instead.

From early on I noticed that a skilled player was in the mix. After coming in 2nd in the first challenge to pop up, I let out a too-loud sigh, drawing the attention of one of the booth attendants. She was annoying me, telling me to turn around and head for a new meetup point on the map, but I was too busy standing on my tippy toes, searching the seven other race stations to see who took me out in a brutal takedown.

But I couldn’t see well from where I was positioned, so I kept at it, working to bump out other racers as I dashed around the open world. I was fully pissed off by then, looking for trouble. And after coming in 2nd (by only 2 points!) in a jump contest I found that I had my jaw clenched. I found myself whipping around corners in my Porsche with fevered determination, waiting for a race to come up. That’s my strongest event type.

With nostrils flared, I exited the multiplayer booth. Turning around one last time to look at the leaderboards posted outside the booth, I noticed that I only lost by 5 Speed Points. I looked up at the winner’s platform, where 1st place finishers were able to pose with booth babes for a photograph, and there stood a white guy. Probably European. Probably a Burnout fan. I took a picture of his face. I took a tight shot of his face so that may find him again for a rematch.

Need for Speed Most Wanted will be released on October 30 for Xbox 360, PS3, PS Vita and PC.