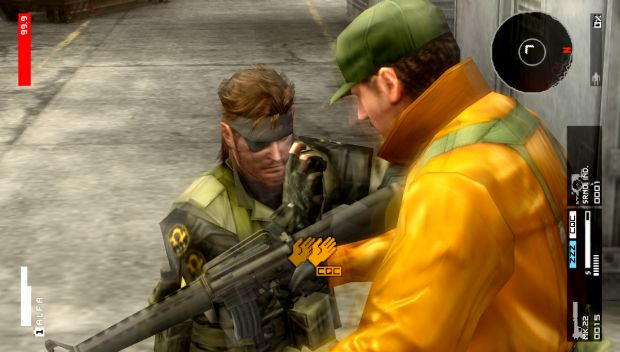 I really loved Peace Walker on the PSP. It was such a good game and its only problem was that it was on the PSP. The funny thing is I’m not bitching about the PSP version for the lack of a second analog stick. No, I was more upset because the lack of Wi-Fi multiplayer meant I would never ever play the game with anyone else. And I don’t know about you, but beating the bosses is really really really hard without the help from a few other people. Plus, the storyline was so good that limiting Peace Walker to a portable system was, well, stupid.

Okay, enough of the sob story as Peace Walker is getting re-released in 1080p HD form for the PlayStation 3 and Xbox 360 so all my complaints are pointless now. Which is completely fine by me. Like with the rest of the Metal Gear Solid HD ports, the visuals have been cleaned up to better fit HD widescreen TVs. And despite some of the blocky graphics, Peace Walker HD was looking gorgous.

Now here is where I would talk about the controls and say how great the second analog stick is. Well, it is, but some asshole had changed the stick setup so left made Snake look right and vice-versa. I couldn’t change the setup because everything was in Japanese so I had to suffer through. Being a videogame blogger is so hard. But aside from that weird setting someone put on, the game plays just like it did on the PSP, but with better camera controls.

In terms of audio, Kojima Productions have tweaked the voices, music and sound effects to take better advantage of the audio capabilities of the PS3 and Xbox 360. As for multiplayer, expect a worldwide matchmaking system. No word on voice chat yet. And of course expect Trophies and Achievements too.

As an extra bonus to PlayStation 3 fans, you’ll also be getting a code for the PSP version of Peace Walker included with your game. Getting both versions on the PlayStation platforms will allow you to play on the go and pick up where you last left off on the console (and vice-versa) through Transfarring, the ridiculously named save data sharing feature.

In regards to multiplayer versus stuff, Konami wasn’t showing it off at their booth here at Tokyo Game Show but it should be part of the pack. It seems like the multiplayer won’t be tweaked though as it’s limited to six players online still. I understand why it was such a small number on the PSP, but there’s no reason to limit that number on the consoles.

While the graphics were looking great in-game, the comic book style cutscenes weren’t so hot. I don’t know what it was, but it seemed to me like the cutscenes were coming across a bit foggy. Like there was a small amount of vasoline rubbed on the screen during the scenes. Which is weird as the cutscenes on the PSP were simply gorgeous.

Despite that, I’m really looking forward to Peace Walker HD. It’s a great game that belongs on consoles.