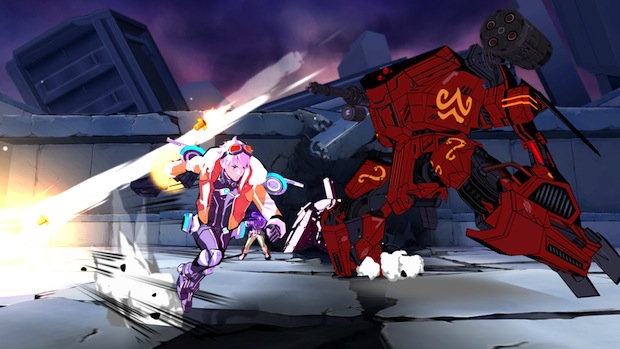 I was already pretty close to all-in after learning of the concept behind Capcom’s Lost Planet spin-off E.X. Troopers. The idea was to take the snowy and fairly serious world and soften it up a bit with cell shading and pink-haired teenagers. It’s still a third-person shooter that centers around exploration, but the action is more arcade-y and the Japanese factor has been turned up past maximum.

And now that I’ve played it, I’m going to be waiting impatiently for a western release announcement.

Let’s face it, Lost Planet is a pretty heavy franchise. Even with all the snow and white, it’s rather dark and gloomy. It’s amazing what some cell shading and manga-style panel artwork can do for a game’s atmosphere. Of course, nicely designed characters, like E.X. Trooper‘s boy hero Bren, don’t hurt either. These things alone make for a more lively game than any of the Lost Planet titles.

This game may stick to the franchise roots when it comes to the setting and story line, but the rest feels so completely different that I almost hate to compare the two.

What really makes Troopers feel more perky is its light, easy, arcade-y controls. There’s no learning curve or complicated controls here. Bren moves with standard third-person control, with the camera mapped to the right stick. For the face buttons, two are mapped to two different types of weapon fire, another to general purpose world interaction, and the last set to running and dashing.

The two-part TGS demo kicked off as a tutorial that taught the control basics and platforming, with a bald guide showing me the way. Outside of standard movement, the circle button covered all other platforming situations, meaning that everything from jumping to climbing to grappling was done with a single press of the same button. This greatly simplifies the actions from Lost Planet, leaving the player free to concentrate on the shooting action.

The demo gradually moved me into battles with snow pirates where my primary, unlimited gunfire was enough to pick off one or two of the baddies. But when larger waves appeared, I had to make use of a secondary weapon that fired out a missile-like multishot; this weapon always did the trick, but had a recharge time. The R1 button could be used to lock onto an enemy and L1 switched the locked target to another enemy. These streamlined, tight controls make E.X. Troopers really easy to get into.

The second half of the demo gave me a taste of what it would be like to run around with a party. Characters Julie and Luan ran around with me as we explored a base together, teaming up to take down waves of enemies. One section had Luan and I covering Julie as she worked to unlock one of the base’s gates to progress. Fire came from every direction, but we managed to hold them off. One attacker’s fire had his target (me) turning into a snowman, forcing me to mash the X button to shake off the snow to continue fighting. Weird, but funny.

Inside the unlocked gate awaited a heavily armored mecha that I did not manage to take down, even with two helping companions. I blame its huge life bar. The situation was similar to a boss fight in a Lost Planet game, but the arcade-y play made it seem more fun and less like work.

And really, that’s the takeaway here. Lost Planet‘s setting and narrative are keepers, but the third-person shooting aspect was a bit too complicated for the really accessible party-style gameplay they seemed to be going for in Lost Planet 2. So now, with streamlined, tight controls, a great-looking manga/anime type look, and a touch of weird, we have something that’s shaping up to be quite remarkable.

E.X. Troopers will be released on the PS3 (and 3DS) in Japan on November 22. Don’t give up hope for a western release!