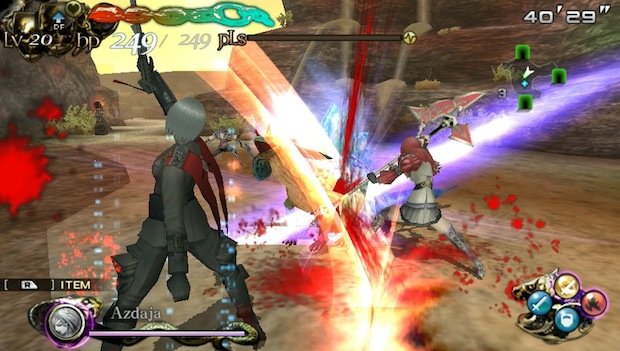 I didn’t get a lot of time with Square Enix’s newly announced PS Vita title, Lord of Apocalypse, but I got enough to tell you that this action RPG looks nice, and that you’re probably going to want to pick this version over the PSP one.

Action RPGs are nice on portables, but they’re super nice on portables with high quality graphics, really nice displays and two analog sticks. All three of these things hit me at the same time as soon as I put hands on Apocalypse. The higher resolution capabilities of the Vita puts you in bigger worlds with more detail, and Square has put that power to good use. Panning around this world on a portable with a second analog stick for the camera felt so right that I can’t look at my PSP in the same way again.

We’ve got nothing in the way of story lines or setting in the limited demo, but I can tell you Apocalypse puts you in the shoes of a fighter that you create. There’s sword play, using the face buttons for standard attacks, and combinations of them for special moves. I was only able to run through three or four zones, bashing a few baddies down along the way, enjoying the tight controls and the clean, crisp visuals. The last zone had me battling what looked to be a big bird boss beast, like an angry chocobo. Computer-controlled allies tried to help me out but we were getting nowhere until I was able to pull off some special attacks, and finally an Ultimate Spell to finish it off. I’m assuming the Ultimate Spell comes from the title’s card game lineage.

Sorry, I know that’s not much to go on. Early demos suck. For now just know that Lord of Apocalypse is a super pretty game with solid combat and great controls. From what I’ve seen at the show I know it’s something right up the alley of people that like to take down big bosses in fantasy worlds. That’s a big thing on portables in Japan these days, you know.

Apocalypse is slated to be a Vita launch title for Japan, so expect to see more closer to December.