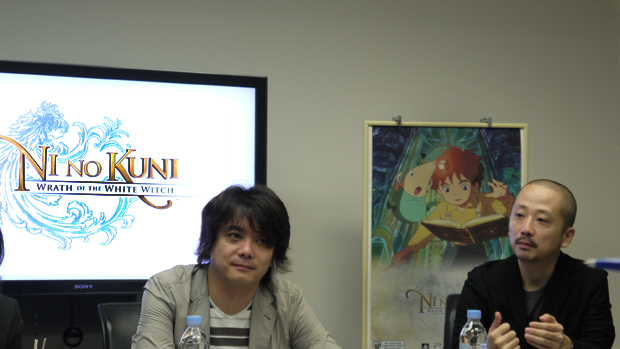 Despite being one of the biggest influences on Japanese game development, we are only now getting a videogame out of Studio Ghibli. I am grateful that Ghibli chose to partner with Level-5, but I am also curious as to why and why now.

Ni no Kuni raises a lot of questions about how the partnership formed, how the two worked together, and whether we’ll see more games out of Ghibli in the future. I was given the rare opportunity to sit down with the directors of Ni no Kuni while at TGS. They were willing to shed some light on this unlikely partnership and where it may lead next.

Akihiro Hino, Level-5 president and general director of Ni no Kuni, said he looks up to Hayao Miyazaki and Studio Ghibli. Even as a creative partner, he couldn’t keep himself from geeking out when they met.

“I met him a couple times over the course of the project and even asked to take pictures for a keepsake,” Hino said. When he first approached Ghibli, the animation studio was still working on Howl’s Moving Castle. The stars wouldn’t align for a partnership until years later, after Level-5 made a blueprint for the story and game.

“Regardless, we talked on a very casual basis and were very friendly,” Hino said. “Miyazaki can seem tough as a director, but as a person he is a very nice man. As a creator, [working on the game] was a very emotional experience that I treasure very much.”

After Ni no Kuni came out on the DS in late 2010, many RPG fans in the West expected it was only a matter of time until it came overseas. Yet, that day never came. Some assumed it was due to it not having an audience or Level-5 being too busy localizing other games — they are, after all, always years behind on bringing the Layton games over. But, nope, it was none of these things. It was because of the darn book that came with the game.

“It was too difficult to package it with the book and sell it overseas. That was the biggest reason why it wasn’t brought overseas,” Hino said, adding that translating the virtual book for the PlayStation 3 entry wasn’t a cakewalk. “In all honesty there are instances where I regret including the book but it’s a bridge connecting the imaginary world to the real world in Ni no Kuni. It did take a lot of time to localize because we put a lot of care into it, but reading the book itself will help you grasp the world of Ni no Kuni.”

Studio Ghibli didn’t simply dump assets into Level-5’s FTP folder and call it a day. Game director Ken Motomura said he worked with Ghibli every day, swapping storyboards, directing motion capture, and reviewing how things turned out in post-production. Hino worked with Ghibli on the staging and theatrical direction of the game’s dialog and animated sequences.

“We couldn’t have reached this universe on our own,” Hino said.

The staging and artistic elements of the project brought the most hardship to the project, from Level-5’s side. It was a learning experience, according to Hino. The small elements Level-5 often ignored in a scene suddenly were examined with an animator’s eye by Ghibli. A pristine stack of dishes in the background of one scene suddenly became a more detailed, messy background element that made the world feel more realistic and lived-in.

If given a chance, Level-5 would love to make Laputa: Castle in the Sky into a videogame. Wouldn’t that be something? Too bad it’s not their call.

“Personally, I’d love to work on bringing existing Ghibli properties to games but it’s up to them,” Hino said. “I’d personally like to pursue and hopefully negotiate over the course of years [to come].”

Here’s hoping that Ni no Kuni does well enough internationally so that day may come soon rather than not at all.