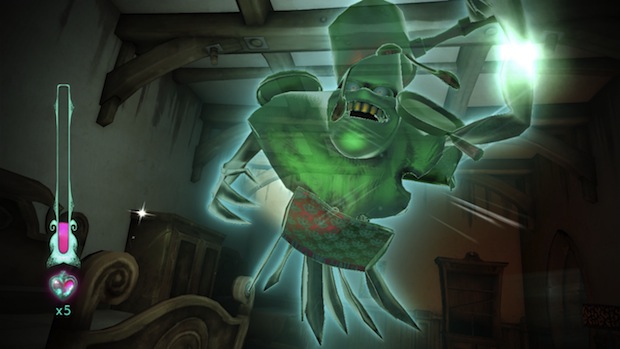 I got a chance to give this title a spin on the show floor of TGS, at Microsoft’s booth. No one told me I would be running in place to move, or flailing my hands around to punch ghosts in the face. Add in the high humidity and the power saving measures going on in Japan, this wasn’t my favorite demo experience today. I was sweating, but it wasn’t from the scares.

It’s not all bad, though. Haunt is a cute title that starts out on rails, with the player holding a virtual flashlight to shine in the face of ghosts and skeletons that pop out at you. It’s a high-res funhouse. This being a Kinect title, you can bet there’s plenty of ducking under things that pop out, or jumping over things that block your progress.

Later the game opens up to let you explore a seemingly endless series of haunted hallways and rooms. In these bits you’ll walk in place to progress down corridors, and the direction you point your flashlight guides your movement. Movement is a bit clunky and slow, and you look like an idiot marching in place, but it works. In one corridor a huge eye in a doorway watched on. I had to freeze my movement when his eye was open, and then run as fast as I could to progress while it was closed.

Occasionally a ghost or other ghoul would pop up and block progress. I had to battle them by doing very Kinect-y things like deflecting attack orbs by swatting my hands at them, or punching ghosts with my fists. Detection of these movements was painfully slow, and not always accurate, though the busy TGS show floor could have been part of the cause.

Haunt isn’t going to blow your socks off. It’s more cute and silly than anything. It didn’t exactly win me over, but the fun atmosphere and voice work by Tim Schafer made it enjoyable.

As of now there’s no word on a US release for Haunt. Japan is still holding on a release date.