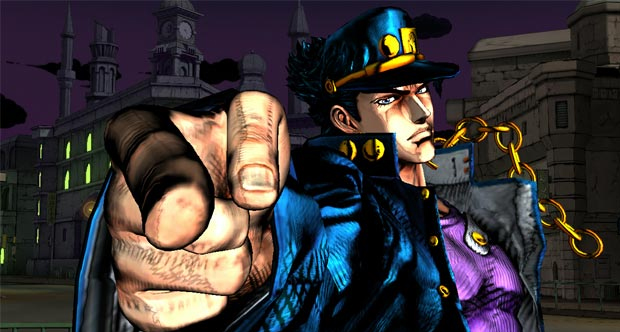 JoJo’s Bizarre Adventure was an odd fighting game for Capcom that was loved by many despite its flaws, in the West. In the East, however, it was one of the first videogames based off a very popular manga series. It’s a series with a lot of character, interesting personalities, and a unique style.

The Capcom game captured the world of JoJo well, but now it’s CyberConnect2’s turn to take a stab at it and bring it to life in a 3D fighting game with JoJo’s Bizarre Adventure: All Star Battle

The result is one of the goofiest and most accessible fighting games I’ve played in some time.

After standing in one of the longest lines at Tokyo Game Show this year, I got to play a brief match in the four-character, two-stage demo. I chose Gyro Zeppeli, a flamboyant guy who loves to throw his metallic balls while riding horseback.

All Star Battle balances its wacky cast of characters with some tried-and-true mechanics. The four face buttons on the gamepad are dedicated to low, mid, strong, and throw attacks. Throughout the fight, you’ll build up your heat gauge which you’ll have to spend to pull off specials. It costs one level of gauge to do a heart heat attack and two do a great heat attack.

The most interesting aspect of combat is the style button that is specific to each character. All Star Battle reminds me of an Arc System Works game in how each character has a gimmick that makes them feel like they came from a different fighting game.

For Gyro, the style button summons his horse which he’ll jump on and attack from until you send it away. While on horseback, a new list of moves and supers are available. When you dismiss the horse, it will charge across the screen, making for an easy blitz attack on an enemy.

Gyro also has metallic balls at his disposal which can be thrown in a variety of ways and laid down as a trap. His specials revolve around them as well. Like Street Fighter IV, the game displays these special moves in a very flashy, cinematic way without bringing a lull to a match. In fact, a lot of the game reminds me of SFIV. It shares a very similar art style to it, going for a darker take on that comic book, ink look. The characters are rendered with a lot of detail, but the game is a bit too dark for a title based on such an eccentric series.

CyberConnect2 has a knack for making simplified fighting games, best displayed in the Naruto titles and Asura’s Wrath. All Star Battle has a much more competitive edge than those, but it also aims for the same accessibility and level of flash. Some characters can turn invisible while others summon a horse. Some stages take place next to a volcano, while others have cars that can hit you if you are in the wrong spot. The game is made with fans of the series in mind, but I think anyone looking for a fighting game that strays from the norm while remaining approachable will want to keep an eye out for this one.

All Star Battle will arrive on PlayStation 3 next year in Japan. There are currently no plans for US release.