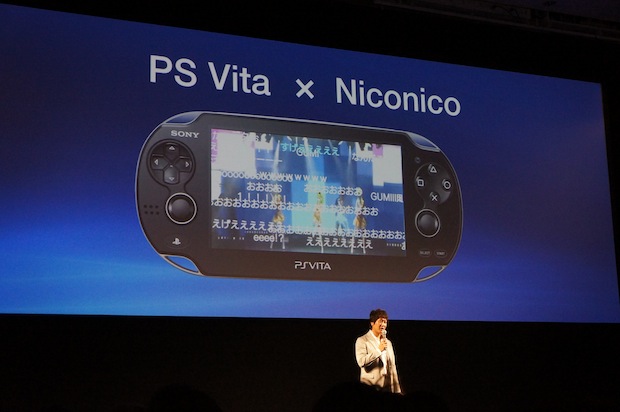 Niwango’s Seiji Sugimoto was invited on stage at today’s Sony pre-TGS press conference to announce that Japanese video site Nico Nico Douga will become an application on the PS Vita. A Vita unit was shown to the audience running a video with the site’s trademark text streaming over it. Sugimoto says that they are working hard with a newly formed development team to take full advantage of the Vita’s hardware, supporting 3G connectivity, touch screen and system cameras.

The application will be available at launch in Japan, though the functionality will be limited to viewing only. In Spring of 2012 movies and live streaming will be added. Finally, summer 2012 will bring support for features like live streaming game broadcasts.

The possibilities for Nico Nico Douga on the Vita could go way beyond simple video watching. Sugimoto hinted at plug-ins that developers could use to work video functions into their games. I hope I can watch the 18+ video section on the go.