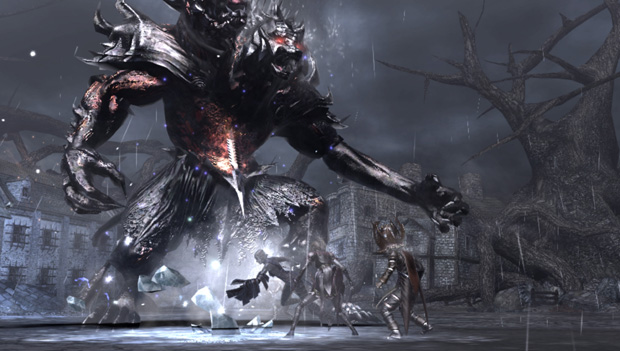 [With apologies to Billy Joel]

Soul Sacrifice was certainly one of the biggest games at this year’s Tokyo Game Show. I had a chance to play it on the show floor and, well, I’m confused. Demos are always a little bit confusing because you’re often going in cold on a game. Then, add the language barrier by playing a Japanese demo and it gets a little trickier, and I know that I’ve missed (or misunderstood) a lot of things by playing it.

Standing in Sony’s booth, I was teamed up with two other attendees and a company representative to take down demons in the title’s cooperative multiplayer match.

The hook of Soul Sacrifice is that the player has to be judicious in how they apply the use of magic to the defeating of demons. This is because magic is powered by sacrifice, an offering of a soul for power. That can be your soul, the souls of your enemies, even the souls of your teammates. Should one of your partners go down, you can opt to give them some of your health and pick them up. Alternately, you can kill them to cast a powerful spell, leaving them as a spirit which haunts the battlefield and becomes little more than a nuisance to enemies.

The dynamic is kind of interesting, but this demo wasn’t a particularly good example of it. The arena we were in was lousy with respawning enemies, so there weren’t much in the way of hard choices that I had to make. I never ran out of sacrifices, despite pretty much spamming magics the entire battle.

When it comes to magic, there’s a solid range of about 30 spells available for the player to take into battle. You can select six before heading off to die, split into two groups of three that you switch between with a tap of a shoulder button. The spells are quite fun. My loadout featured a spell which would lock on to three targets and shoot darts of flame, as well as a grenade-like fireball, and a short-ranged electrical attack. Healing spells are available as well, along with other support magic.

Some spells are activated with a tap, while others need a little more time to charge up. My favorite spell had my character lifting stones from the Earth and using them to encase himself in a ball of solid rock. In this state, I could roll around the battlefield and do light damage to whatever I bumped into or spin myself like Sonic the Hedgehog and dash off for a harder hit.

The game looks great in a graphical sense. Gnarled, dead trees surrounded the battlefield, structures lay in ruins; it’s a dark world out there. The character designs are complex as well. All of the playable characters featured beautifully detailed models, scarred and battle worn.

It’s interesting, conceptually speaking, and I like the premise of the player’s actions coming at a personal cost, having to weigh the benefits of using a powerful spell (perhaps even one which nearly kills the player themselves) against the immediate danger posed by enemies around you. This should make for a difficult and rewarding balancing act. That’s not really what I got to see in this demo, though. Cool as it was, this was built for people to be able to complete it, not necessarily to challenge them, and it’s hard to get a real sense of what the final product will be like with such a tiny sliver of gameplay.

But for a growing platform like the Vita, it represents an opportunity to put something unique on a handheld plagued by ports. And that is something to celebrate.