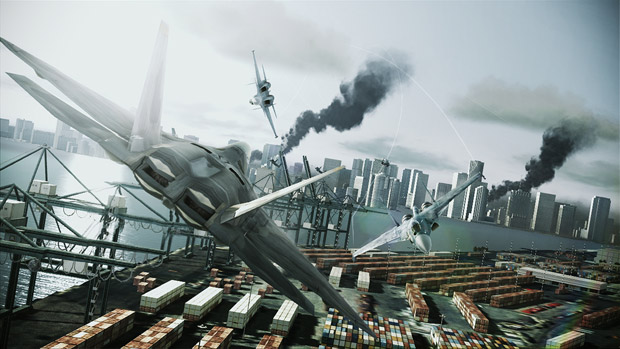 Namco Bandai invited us out to their offices in Japan to see the Tokyo Game Show line-up before the show opens today. There was a lot to see, so we didn’t have too much time with all the titles, which sucks since I really want to play Ace Combat: Assault Horizon again. Not because I enjoyed it, but because I have no idea what happened in my hands-on. We were dropped into the newly revealed Capitol Conquest mode where it was basically a domination-like multiplayer gametype. The eight-player battle saw us attacking the opposing team while attempting to take over points and gain stronger weapons.

After each death, we were able to get different jets or helicopters before jumping back into the match. The airships’ controls were pretty standard, and you have a new control feature that assists in dog fights when needed. My problem with the game was that the action was too fast-paced. I’ve played past Ace Combat titles before and never could get fully into them because of how slow they were.

So you would think I’d enjoy Assault Horizon. Nope. The action was so fast and so hectic that I really don’t even know how to feel about what I played. I want to give the new Ace Combat another whirl as I’m not happy that my first hands-on experience was so jarring. Plus, I want to check out the standard deathmatch and co-op focused missions before completely writing this one off.