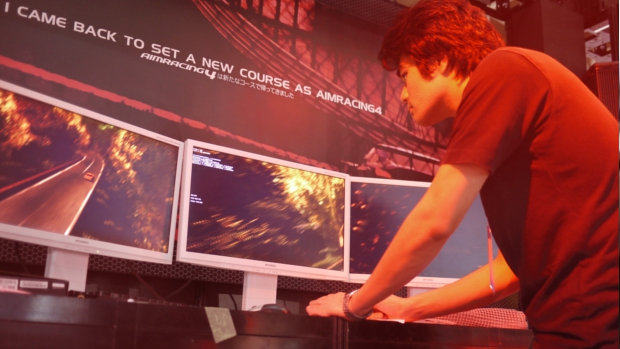 One of the cool bonuses to coming to Tokyo Game Show is meeting young Japanese developers in the student area. In comparison to what you see in American schools, the work on display is staggering. No school booth impressed me more than the one that the Japanese Electronic College set up. This is a school in Tokyo with graduates who have landed influential jobs at Konami, Square Enix and other prestigious Japanese developers.

Read on to hear more about what it’s like to learn game design from the other side of the world.

The games on display at TGS were imaginative, well designed and legitimately fun. One game was bizarre variation of golf mixed with the wackiness of Katamari Damacy. In it, you throw a rice ball down a hill as you dodge flying teapots and other obstacles.

My personal favorite had to be this one game that was a direct tribute to Rez. It played, looked and sounded like a retail product, so much so that I was shocked when I was told the creator was giving it away for free — in a DVD case with an amazing oil painted, retro 70s sci-fi cover, no less! He’d probably get sued otherwise, but I still wish there was a way for other Rez fans to experience it.

I had to find out more about these students and the amazing games they are making in Japan, so I set-up an interview with student/game designer Katsuhiro Matsumoto. His English is much better than my Japanese, but his real talents lay in making games – I wish I could say the same. I just write about them (poor me).

What is your major and school?

What were the games you loved, as a kid?

When I was a kid I liked playing with my Game Boy. Later on my elder brother took me to an Internet cafe and I started playing Western games like Half-Life and StarCraft.

What made you want to learn how to make videogames?

I wanted to create my own world and have a community live in it. The first online game I played was Diablo II. I made lots of non-Japanese friends there. They really inspired me and changed the way I think.

Do you prefer Japanese videogames to Western ones? Why or why not?

I prefer Western games. Japanese video games are also fun but they are mainly designed for playing alone. I like to play with multiplayer – the more people the better! I don’t hate Japanese games but I always prefer to play a Western game.

What games inspire you now?

Games with a huge community. I like games where you depend on other players to do something for you.

What games have you made? What are their titles and what are they about?

The first game I made was an adventure game. It had a boss, enemies and different kinds of traps. I wanted to make a game that was like Diablo II. I never gave it a title, though. The next game was an action game called Osio, which means “salt” in Japanese. It’s similar to Super Mario World.  The story is about a group of mafia members who have to deliver the salt to the post box [Editor: You know, just like in Super Sopranos World?]

Then we made a 3D tank action game called Conquest.  It’s an online multiplayer online game that allows up to eight players. The primary game mode is pretty much capture the flag. The game was designed by seven programmers.

The newest game is the game we displayed at Tokyo Game Show: AimRacing4. It’s a racing simulator. The concept of the game is to make it realistic. It isn’t that realistic at the moment, but eventually I hope it will be … We made this game with five programmers and nine designers. It took us three and a half months to develop it.

What type of things do you practice and learn at school?

We learn everything about how to create a game in our course. Not just programming but art and music, as well. We also learn how to present them to people and how to make a good presentation.

What developer would you like to work for and why?

I want to work at a place where I can achieve my goal, where I can create a large game with a large community where people meet and online relationships are formed.

What do you think of Western developers?

It depends on the developer, but I certainly like Blizzard. Mostly because they made Diablo II, which is the first online game I’ve ever played. There are some really good Japanese developers and some really good Western developers. On the other hand, there are really bad ones on both sides. Labeling them all as a whole is quite a hard task.