I’m a dick. I’ve had so many opportunities to play Okamiden this year, but I’ve yet to get to it. Part of that is because playing a DS game on a big event’s show floor is pretty painful. With flashing lights and cosplay and giant screens all around you, it’s hard to focus on a little portable game.

TGS offered a different atmosphere. I got to check the game out in Capcom’s deluxe hotel space (seen in this video). That helped. Still, I wasn’t quick to jump on the game. I thought to myself, “Eh, I should go and play something else. I know Okamiden is going to be good. I know Okami fans are going to buy it, and non-fans won’t. What’s the point?”

Like I said, I’m a dick. I was totally wrong in de-prioritizing Okamiden. The game is amazing. If things come together, it could well be better than its near-perfect predecessor. Yeah, I’m pumped. Read on to find out why. 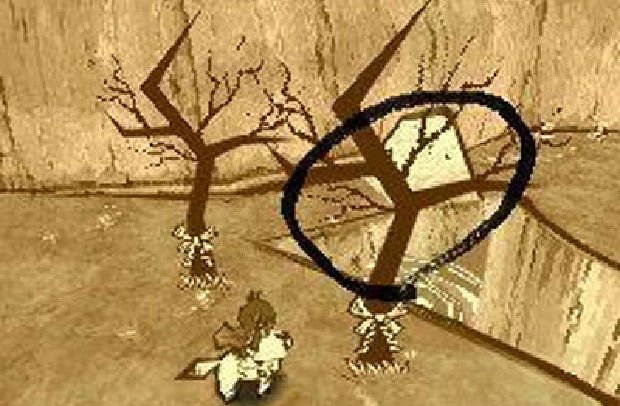 I loved Okami on the PS2. I loved it a little bit more on the Wii, just because the pointer controls made me feel more like a doodling douchebag god on my couch. Okamiden takes that feeling even further. Of course, you probably knew that on an intellectual level. It’s common sense that using the stylus to draw on the screen is both more accurate and more physically gratifying that the PS2’s analog stick or the Wii Remote’s IR pointer.

What I didn’t guess was just how much better using the stylus would feel. The sound of the stylus scratching and smearing across the screen, the way the black ink trails off your stylus in a spot-on simulation of real ink drawing; it’s all very convincing on a visceral level. It’s also just faster, which means less time thinking about the fact that you suddenly have to freeze the game world, and more time staying in the moment.

Everything else was solid, just as expected. It feels a little awkward at first to hold the stylus between your fingers on your right hand while pressing buttons with your right thumb, but I got used to it quickly. The combat feels like Okami, despite the fact that I was playing as a puppy instead of a full-grown wolf, and the puzzles and exploration were spot-on as well.

I didn’t get far enough into the game to know if its boss battles, story, and puzzles hold up over the long haul, but my brief time with it has shown me that the fundamentals are there. If Capcom can just pull off a near-perfect follow-through, they may have a semi-sequel on their hands that surpasses the original.