Ghost Trick is not an action game. It’s the new game from the team that brought us the fairly non-violent Ace Attorney series. Still, non-violent doesn’t mean easy, and it certainly doesn’t mean that you aren’t going to die. In fact, Ghost Trick starts off with the death of the game’s main character, and from there on out, his continued existence on this mortal plane is constantly in peril.

I don’t want to say that Ghost Trick is “darker” than the Ace Attorney series, because that franchise certainly has its fair share of murder as well. I will say that thus far, Ghost Trick feels more intense. It still bears the Ace Attorney series’ signature wit and priority towards interacting with objects in the room via stylus tapping, but with Ghost Trick, you feel much more personally involved. It’s you who inhabits the objects that you interact with. More importantly, it’s you whose life is on the line.

Read on for more on how Ghost Trick managed to move me.

In Ghost Trick, you play as a spirit with no physical form of his own. You’re constrained to travel from object to object within a defined physical space. You can’t get from one end of a room by flying around like a ghost, because contrary to the game’s name, you’re not a ghost. You’re a poltergeist, which means that you’re bound to the inanimate objects in the game’s world. Your spirit can stretch out from one object to another, but it can only go so far (about 12 in-game inches.) That means that in order to get from here to there, you have to get some objects arranged in just such a way. Not an easy task when you don’t have a body.

You’re able to move most objects at least a little bit using “tricks.” If you possess a small window, you can usually open it. Possess one of those weird bobbing head birds, and you can definitely get it bobbing. If an object is too heavy, though, you won’t be able to move it directly. Instead, you’ll have to affect it with some other object, or worse, you may have to use another object to affect another object and/or living thing to get that to move the object you need moved. It’s a lot of fun to get these mousetrap-like events in motion, but it’s not always easy.

I don’t want to give it away here, but let’s just say that it took me quite a while to get through the TGS demo’s “Advanced” difficulty level. The game’s puzzles were always fair, but they took some serious foresight and abstract thinking (not to mention advice from smarter game journos in the room) in order to move forward. As Sissel (the game’s undead protagonist) only has a brief time on this earth before drifting off into the great hereafter, I felt constant pressure to get him to the next point in his story, before it was too late. 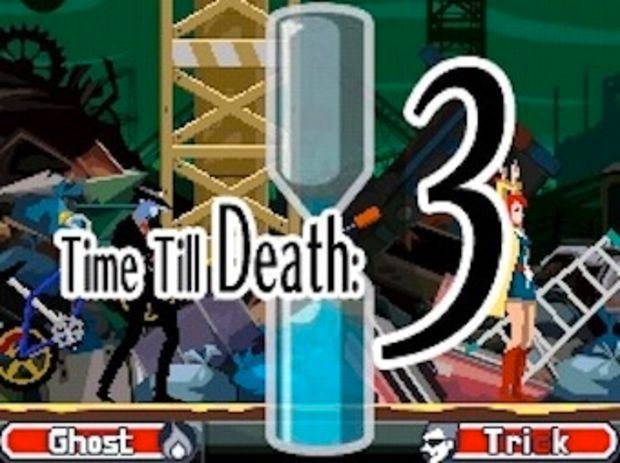 Maybe I was over-relating with him, as being at TGS is also something like being a poltergeist: hopping from appointment to appointment, constantly puzzling out how to get from point A to point B, and always with the sense of being on borrowed time. Just like with Ghost Trick, keeping a good sense of humor does a lot to break the tension of an event like TGS, and that’s the one area where I’m sure Ace Attorney fans will find comfort. The game’s script is equal parts charming and surreal, in the same way that the Ace Attorney games are known for. Though Ghost Trick is nowhere near as text-heavy as the series that proceeded it, its script still had me captivated.

Throw in the fantastic character animation and sprite-based backgrounds, and I was sold. It was tough to put the game down, but sadly, I had another object to jump to. I’m really looking forward to getting my hands on the game when it’s released later this year (or early next year, as the game’s release date is still yet to solidify.)