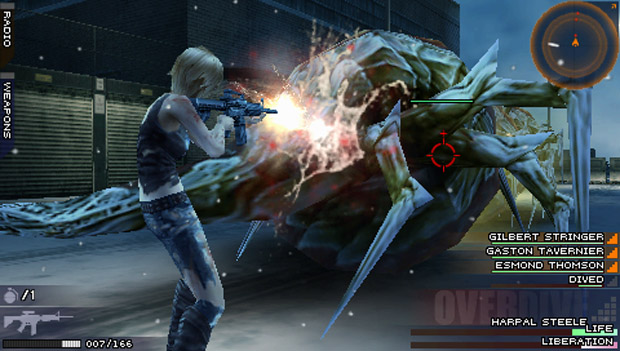 The lovely Aya Brea and the Parasite Eve series are back…in a way. Square Enix’s The 3rd Birthday is a bit different from what I expected in a Parasite Eve series game, but that doesn’t mean that there isn’t a lot to like in the PSP title. Square Enix calls The 3rd Birthday an Action RPG, but I see it more as a smarter, more Japanese third-person shooter.

I’m hoping the Parasite Eve fans haven’t left the room after reading that.

I played through a couple of Square Enix’s demos on the show floor, but the most notable (and difficult) was one that found Aya in a subway that was infested with large, strange beasts called the Twisted, which are trying to take over New York. I was able to take them out with what seemed to be pretty standard PSP-style third-person shooting controls. Holding the right trigger and pressing a face button fired. The left trigger was a toggle. Pressing it brought up a pop-up menu that showed which face button corresponded to an equipped weapon, allowing for easy switching. Movement was controlled with the analog nub, and the camera moves by pressing the d-pad. Having to take your hand off the analog nub to adjust the camera wasn’t ideal, but it’s something we’ve seen plenty of times before on the PSP, and it seemed to work well enough in The 3rd Birthday.

The twist in this game is body jumping. By hitting a button, Aya is able to teleport into the body of another person in the vicinity. This mechanic adds a neat twist to the otherwise pretty standard third person action. I found that I was using it to get out of hairy situations, like being backed into a corner by multiple enemies. I was having a pretty good time darting from body to body until I encountered a very large, insect-like enemy that was able to stun me using a  projectile and then impale me with one of its legs, in a move that was an instant one-hit kill. Unfortunately, I found myself dying multiple times, much to the amusement of onlookers. Even still, while the challenge was steep, I really liked the twist this body jumping brought to the table.

I was really impressed with the visuals in 3rd Birthday. The game graphics are sharp and move smoothly, and the textures are on a level pretty close to that of later PS2 games. While I only saw bits and pieces of the in-engine cutscenes, they were all of a very high level for a PSP game. Even blown up on an external television display, The 3rd Birthday impresses in the looks department.

This was only a brief taste of what 3rd Birthday will be like, but I came away impressed. The controls are tight, the visuals are extremely impressive, and there’s plenty of the lovely Aya Brea to see. All good things. We’re definitely looking forward to seeing more of this game.