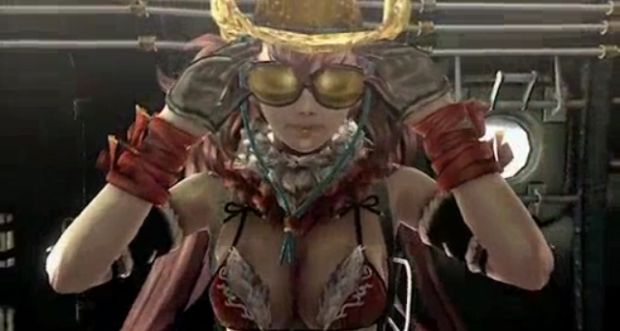 D3 Publisher is putting out a new Onechanbara starring two vampire sisters named Kagura and Saaya. Other than the vampire part, these new girls in Onechanbara Z: Kagura look just like the last two heroines from the last Onechanbara. D3 is keeping the theme the same though as you have to fight monsters while wearing next to nothing.

Seriously. It’s like Kagura’s (the one in the cowboy hat) is just wearing some small napkins on her boobs and around her waist. Her ass is hanging out there and her boobs jiggle violently at every small movement. Not that I’m complaining.

The combat is largely the same too. Kagura has her two swords, a boomerang-like weapon and two extendable blades in the same style as Kratos’s Blades of Chaos from the God of War series. I have no idea what was going on with the story since it was all in Japanese, but does it really matter? Kagura is sent on a mission, jumps out of a plane, slams into the ground below and then kills hundreds of zombies as blood flies everywhere. Cool.

It was fun, but it’s one of those games that will be fun in small bursts before you get bored and want to play something with actual substance. As it is, Kagura is only scheduled for Japan as an Xbox 360 exclusive sometime in 2012.