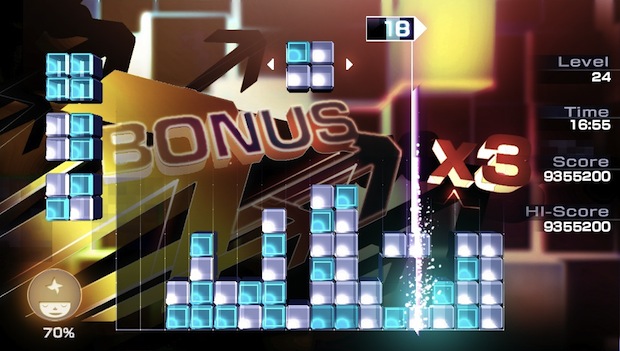 I’m kidding. Kind of. But it really is just Lumines, but now on the Vita. And that’s all we really wanted, right?

The TGS demo for this sequel was really short, like 1.5 stages short. I got to refresh my block dropping skill on the first stage, a pink and grey colored throb-fest that looked fantastic on the Vita’s screen. Blocks seemed to pop off the screen, and now they’re 3D. From there the game moved on to a more mildly colored level where windmills spun in the background. And just when I got into it the screen faded to black and thanked me for playing. That’s all there was.

Still, the good news is that Lumines is coming to the Vita, and it looks really nice on that big ol’ screen. The Vita’s d-pad and clicky face buttons play well with Q! Entertainment’s newest. There’s nothing to complain about. I just need more.

Stay tuned, as we’re hearing things about planned social features for Lumines Electric Symphony. There will also be touchscreen and rear touch panel functionality that we didn’t get to try out in this TGS demo.