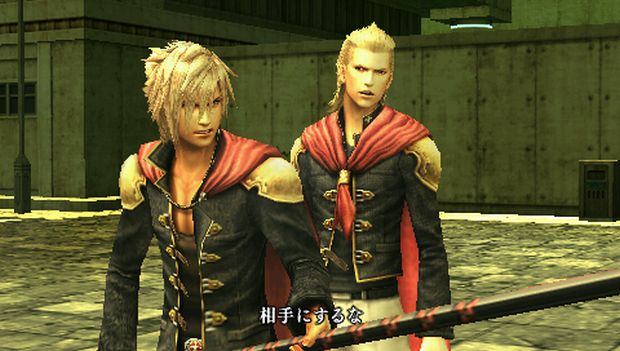 I really f*cking loved the gameplay of Final Fantasy Type-0 on the PSP. I’m pretty much the opposite of a Final Fantasy player (role-playing games in general, really) largely because of the fighting mechanics. With Type-0, the combat and exploring is all streamlined and presented similarly as a Dynasty Warrior game (but with way less enemies on the screen.) Fighting is going on all in real-time and you use melee and magic attacks that are tied to each face button on the PSP.

There were a couple of other characters in my party as I was running around killing people and I could easily switch who I was playing as via the D-pad. Each character of course had different play styles, such as one who relied on nothing but magic and another who used only a staff to attack.

Even the leveling up process happens in-game! The classic Final Fantasy victory theme plays over the in-game music and audio to notify when you’ve leveled-up.

As for the storyline, I have no idea what’s going on. The intro movie showed off some kind of war taking place between different groups. The main character in the video is a soldier and gets his ass kicked by the opposing forces. It looks like he was about to die until his Chocobo came in and saved the day. The happy moment doesn’t last long though as the Chocobo gets attacked. The camera then pulls out as the Chocobo is laying on the ground covered in its own blood. Awesome!

So as far as I’m concerned, Final Fantasy Type-0 is about a dude getting revenge for his murdered Chocobo. Yup. No word on a US release but I’m sure you hardcore Final Fantasy guys will just import it once it’s on Play-Asia.com.