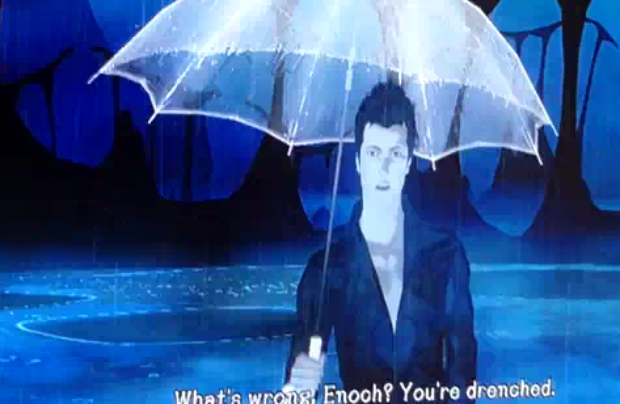 El Shaddai may be my favorite game of the show. Ni No Kuni defintiely comes close, but that’s soley based on how beautiful the game looks. El Shaddai doesn’t quite reach that mark in the gameplay department, but it wins for originality, unpredictability, and raw fun.

The game starts off as a simple 3rd person action game. Analog stick moves your character, right shoulder is for block, X is for jump, and B is for attack. Sounds to simple, right? Well, just because a game doesn’t involve dialing in combos doesn’t mean it’s easy. Though there are multiple ways to attack (jump-attack, guard-attack, etc), the game’s combat system really centers around a broader strategy. By using guard attack after an enemy has been properly knocked around, you can steal its weapon. The video above depicts the first time that you steal a shield weapon. Depending on the situation, you’ll want steal a weapon specific to your needs. That means that assessing the battlefield isn’t just about sizing up threats, it’s about window shopping for weapons as well.

Just when you’ve gotten over that, the game suddenly turns into a 2D platformer with a striking, styalistic visuals. Then after that, a guy that looks like Travis Touchdown comes out and starts talking to you about umbrellas. It’s pretty amazing.

Yes, really. Check out the videos below if you don’t believe me.