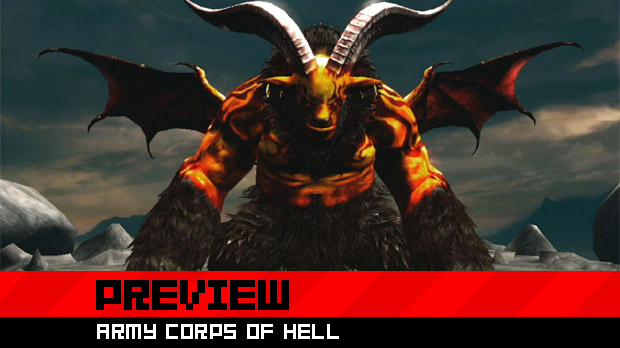 With another system launch comes another batch of hamfisted portable entries in popular series and rushed, undercooked games. I’m sure Ridge Racer will be as good as it has ever been on the PlayStation Vita, but it’s not exactly got me invested in buying the system.

Amidst the PS Vita’s announced titles, Army Corps of Hell stands out as one of the few original titles being put out by a high-profile development team. It’s a game designed to turn heads and have onlookers ask “Uh, what’s that you are playing?”

Put together by new studio Entersphere, containing members who previously worked on Pikmin, ACoH is like Overlord if it were a little less boring and a lot more metal. Not bad for a debut. In the game, you take on the role of an army leader who invades heaven only to be banished into hell.

Since he is metal as f*ck, he decides to make the most of his location and form an unruly army of goblins in an effort to try again. I’d probably do something similar if I were banished from heaven, so I felt a bit more sympathy for him than most game protagonists. That’s as much back story as I was given, but the game itself is what has me invested.

Rather than hacking through hordes of demon spawn Dynasty Warriors-style, ACoH gives you your own swarm of orcs to direct in battle. The game almost controls like a mech game, where you must target an enemy while holding down the right trigger until able to deal maximum damage. Once 20+ orcs pile up on a stupid demon jerkface, you are prompted for a timed-button press. If you time it just right, you’ll deal extra damage.

The enemy will explode in a bloody pulp with a single organ or eyeball. You can then send your minions to feed on the enemy remains, unveiling an item that you can later equip. Since the demo only ran through a brief area, it’s hard to say what impact leveling and gaining new equipment will have. Considering the publisher and developer involved, I’m expecting there will be many progressive elements that will keep players interested.

Over the course of the game, the player will gain different units that are best suited for specific situations. Wizards are good for small enemies spread out in front of you, spearmen are ideal for concentrating on enemies directly in front, and swords are the default, go-to-class for bosses and most other enemies. The triangle, square and circle button are mapped to each class and deploying them is as simple as holding down the right trigger.

You can also use the left trigger to change formation — going between a defensive and offensive order. Since the demo was kind of easy, I never really sensed much of an impact between the two formations. Finally, you have the ability to dodge, which becomes essential when going up against larger enemies and bosses. Once again, I must stress that the game feels like a mech title in some weird way (or maybe I just have Armored Core stuck in my head).

The game seems a bit easy due to the ability to heal yourself via a mini-game which requires you to tap quickly on the back of your Vita. It’s tiresome and irritating, but it comes with the welcome reward of regenerated health. I can’t help but think there are better concepts the developer could have come up with then pounding on the precious hardware you just unloaded $250+ on. A rhythm-based mini-game would go over much better, even if it makes the game slightly less metal.

It’s hard to comment too much on the game’s aesthetic with the brief demo, but, visually, it lacks an identity. The game opens with a neat manga-like cutscene, but the style itself looks a bit dull. In contrast, the audio is fantastic with a heavy metal soundtrack performed by Japanese band United. Even the orc cries have their charm and lend the game a lighthearted feeling.

It remains to be seen how Army Corps of Hell will expand on the basic concepts shown in the demo, but, in the very least, it promises something different on a newborn system that seems to be offering a bit too much of the same old thing at the moment. I look forward to learning more about the world of ACoH and how the unique combat will pair with the overall design, in the near future.