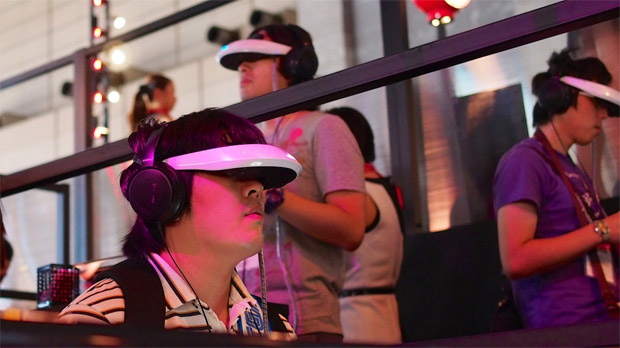 I had the chance to go face-on with Sony’s new HMZ-T2 3D headset at Tokyo Game Show this week, putting it to the test as a face-worn gaming display. Sony dedicated a good sized portion of their booth to it this year in a push to get it in front of gamers.

This is the second generation of 3D visors from Sony, improving somewhat on the spacey dud we tried out at CES earlier this year. Using small 720p OLED displays for each eye, this visor gives you a virtual huge 3D TV at about five feet in front of your face. Playing Hot Shots Golf 6, I found that the image quality was really high, and I had no problem enjoying a round of 9 holes. With its clean and colorful image, it was really like having a nice HDTV in front of my face in a dark room.

Unlike its predecessor, the HMZ-T2 did not feel impossibly uncomfortable. Still, being front heavy, it seemed to place an unnatural amount of weight on the bridge of my nose, though Sony says that fitting it properly to your head with its new adjustable band will help with that. This one is lighter and more comfortable than its predecessor, and the image quality seemed to be a bit better than I remember the previous one having.

While the HMZ-T2 is a compelling piece of technology and large improvement over the previous model, I still don’t know that I’d like to spend more than 15 minutes with a front-heavy space visor attached to my face.

The other issue is the asking price, which is set at 70,000 yen (almost $900) for its October release in Japan. That money could go toward a real HDTV, and this way you wouldn’t have to grab around blindly to pick up a game controller.