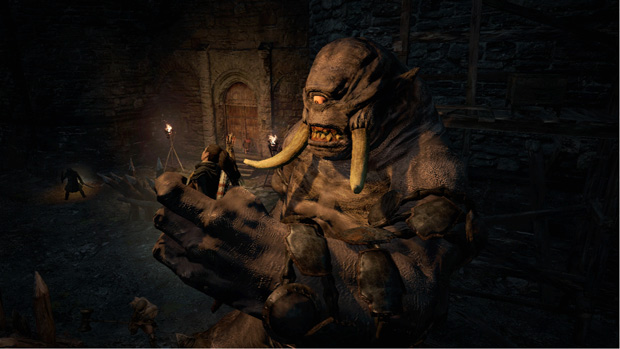 Any doubts about Dragon’s Dogma being Capcom’s answer to The Elder Scrolls series were laid to rest when I arrived at Tokyo Game Show. Capcom perfectly knew what comparisons they were inviting when they brought that epic ass dragon to their booth.

It’s still far too early to say how the game will compare to Skyrim, but the new features, locations and character creator shown at TGS have resparked my interest in the game. Dragon’s Dogma was presented at E3 with a lack of focus that left me skeptical of the game, but now I’m starting to come around to Japan’s take on the Western open-world RPG.

The demo opened with a member of the development team showing off the character creator. It has all the features you’d expect out of a game of this type. It’s not as impressive as Skyrim, but it’s certainly better than Dark Souls. Along with all the basic options, you can also choose posture, breast size (YAY!) and muscles. Finally, a Japanese game that at least gives you the option of not having all your characters look like hyper-sexualized, muscle-heads! You can also detail the face with scars, tattoos, make-up, wrinkles and freckles.

The developer proudly stated that every character in the game was made within the character creator. It certainly is impressive but there are some characters I came across that looked awfully fugly. Black characters tend to look strange in Japanese games and Dragon’s Dogma is no exception — they look like pitch black and soaked in Vaseline. I guess you can’t blame a country where black citizens are scarce, but, even still, this is something the West got over a long time ago.

After the character was created, the player departs from a ship at a port town within the game’s medieval world. After getting a brief look at the citizens (who speak with British accents) and scenery, a dragon swoops down and starts to tear sh*t up. Just when I got on the edge of my seat and ready for some quality dragon time, the developer skipped to a different scenario.

Now we are in a different city hub, playing as a sorcerer. While you may start the game with a mage who has a focus on white magic, you will eventually level-up into an aggressive sorcerer. Even with some powerful spells, the sorcerer is a more defensive class that depends on its pawns to best its enemies.

Pawns are your party members you direct in battle, each of which can be fully customized and traded online. Players can even rate your pawns, give them gifts and trade for one of your own. It’s kind of like owning and trading virtual slaves. Okay, now I’m depressed … moving on.

In the spirit of TGS cosplayers, our female sorcerer is scantily dressed which is turning some heads in town. The equipment screen looks an awful lot like the one in Oblivion, but Dragon’s Dogma makes up for it by adding in real-time clothes swapping. After buying some clothes, the player comes across a citizen who has something against cyclopses and wants one killed.

Using an item to transport to a cliff side, the player is now within the vicinity of the towering, one-eyed monstrosity. Unlike Skyrim, magic in Dragon’s Dogma requires no resources. The power of your magic relies only on how long you charge it up, lending the game a more action feel (remember this is designed by the director of Devil May Cry). One of the neat features of the game is that characters will climb up and defeat monsters as they cling on to their body (a la Shadow of the Colossus).

Visually, the game has a very classic 1980s Dungeons & Dragons look that I adore. From griffins to golems and eyeball monster things, the world of Dragon’s Dogma looks directly ripped from the pages of a Dungeon Master’s Guide. My only problem with the visuals is the HUD, which overlays a button mapping guide. It covers a significant portion of the screen but can be disabled. It’s a necessary evil considering all the button combinations and configurations that change the layout, but it breaks the immersion.

If you said I could have Skyrim or Dragon’s Dogma right now, I’d choose Dragon’s Dogma. I’m aware this might make me seem crazy, but I’m genuinely intrigued by this title. Dragon’s Dogma is an exciting unkown, where as Skyrim is just a prettier, retuned Oblivion. Of course I’m going to pick-up and play both and will finish Dragon’s Dogma‘s 60 hour campaign (eventually).