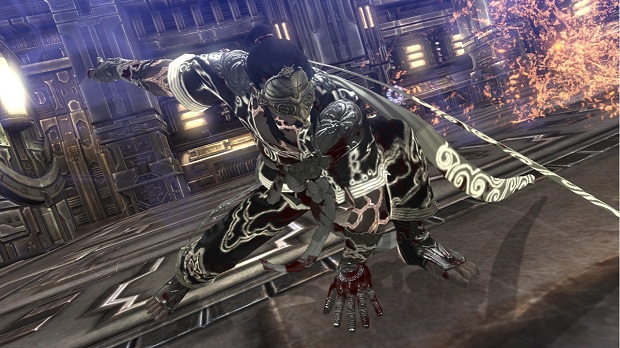 It’s fitting that I saw Asura’s Wrath alongside Dragon’s Dogma at TGS, because both their titles sound like euphuisms for diarrhea. This is kind of ironic because Asura’s Wrath is kind of the opposite of liquid crap rushing out of your ass. By this, I mean it’s quite enjoyable and worth seeking out.

Even after the Captivate and E3 preview builds of the game, many mysteries surround this title but the inherent quality of it becomes more and more apparent. This TGS demo, while not the least revealing of what exactly the final game will consist of, pushed me further into believing Capcom and developer CyberConnect2 are onto something great.

The entire demo consisted of one, prolonged epic fight on the moon between Asura and another half-naked, roided-out god. If this sounds over the top and awesome, it’s probably because the game is Japanese. The pomposity of the dialogue, characters and action gives the game a lot of personality. It’s a game where a character says, “I don’t fight for evil. I don’t fight for good. I just fight.” If that isn’t incredibly rad, I don’t know what is.

The combat itself is like a bizarre hybrid of Virtual-On, Street Fighter and God of War. Like a fighting game, you have various power bars you fill up to unleash devastating special moves. Like Virtual-On, you quickly glide and dodge across the stage and spam projectiles when away from your opponent. Like God of War, the game is ripe with QTEs that help tie together actions in different areas while providing some eye-candy.

The HUD layout and visual style reminds me of Street Fighter IV in a very good way. The game looks more like a fighter than an action-adventure title. It makes sense then that fights are more about building up your Unlimited Mode meter, using Bursts attacks to pummel enemies and finishing them off with some Counters (via QTEs).

The moon is a pretty big place. Rather than locking Asura into a confined arena, this stage feels almost endless in space. The game takes advantage of this by having the opponent make large attacks that require quick dodges and jumps for the player to evade. On paper, it sounds no different than God of War but the flow of combat and sense of space lends Asura’s Wrath a unique feel that sets it apart from other action games. Dodging between laser blasts and flying toward an enemy is a lot of fun.

The demo ends with the opposing deity unsheathing and stabbing Asura with the longest sword ever. Asura gets stabbed off the face of the moon, his body dragged all the way down to Earth (approx. 380,000 kilometers). It’s pretty ridiculous and it’s pretty awesome: I think that just about sums up Asura’s Wrath.