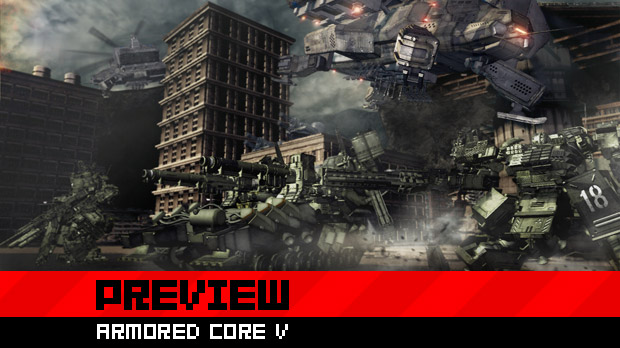 Armored Core isn’t a series I’ve ever played or considered investing in for more than a couple hours. Right now, you are most likely cursing my name or thinking, “Yeah, me too, dude.”

Although I appreciate the customization and depth the series offers mech fans, the steep learning curve of the controls and menus always provided a barrier I never dared to pass. Now, From Software (Dark Souls) are meeting me on my own mentally-feeble level by simplifying the game without doing away with its signature speed, difficulty and depth. It’s just the right amount of twitch, strategy and polish to give the series a successful reboot.

[By the way, this is the fifth reboot in the Armored Core franchise; it is NOT the fifth sequel. In fact, it’s the 14th entry in the series. Confusing, I know.] 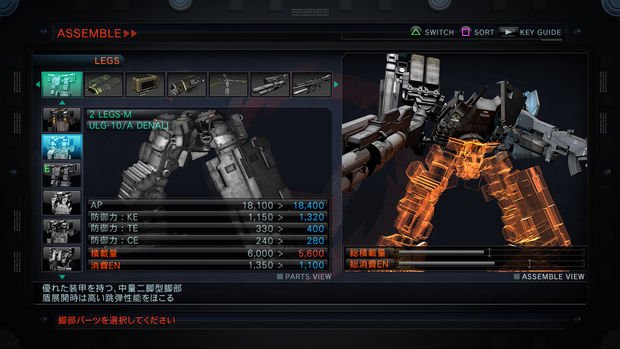 After the hands-on demo, Producer Toshifumi Nabeshima said, “The complexity and difficulty [of the Armored Core series] are the appeal to hardcore fans so we are keeping those things and finding ways of getting new fans.”

There is a dividing line between complexity and excess that few developers recognize in their own games. From Software is one of them. Its efforts in slimming down Armored Core to its basics and pairing it with a multiplayer focus presents the series in a new light. Now, players will be able to form 20 person parties who can play together online in groups of up to five. The main idea being that players can keep in touch and easily join another player’s game. There will also be 5-on-5 multiplayer but I didn’t get to check that out. 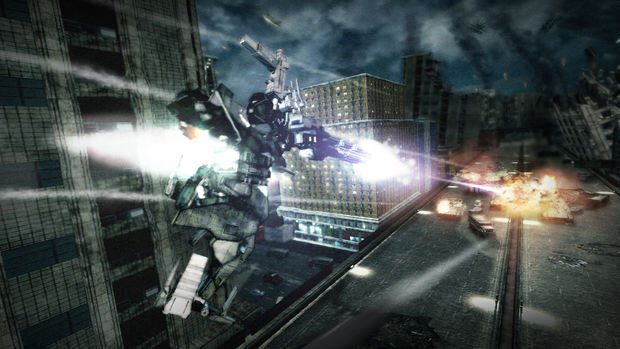 Although it’s disappointing that the game doesn’t have a mode where all 20 players can play together, Armored Core V is still offers the promise of many late nights doing mech stuff with mech-lovin’ friends. Instead of lowering the game’s difficulty, From Software wanted to let newbies get by with a little help from their friends. So, in this reboot, players can take on co-op missions with five players or play the single-player campaign with a friend.

As with Dark Souls, it’s refreshing to see a developer keep high levels of complexity and difficulty intact in a game while keeping it accessible to players who are willing to commit the time to learn the systems and become well-versed in mech ass kicking. 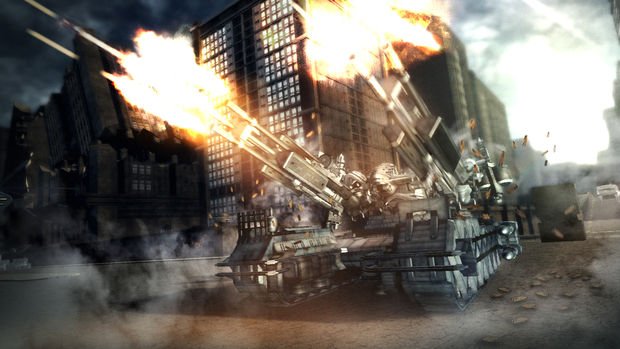 The game itself feels great and the controls were easy enough to grasp within the 30-minute demo. Dodging missiles, scanning enemies and jetting through the air felt seamless and hassle-free. The new controls and HUD work to the series’ strengths of providing hectic, twitch-based mech battles, where a well-timed boost can be as vital as strategic weapon management.

Although I couldn’t get past the level’s end boss, I enjoyed my time with the demo — even the part with me getting my ass repeatedly kicked by that stupid mech! The game’s sense of speed, atmosphere and challenge recalls the criminally overlooked Ghost in the Shell game for PlayStation. To be honest, that was the last time I cared about a mech game but apparently it might not be the last. I look forward to hearing more about this game as it gets closer to release next year.