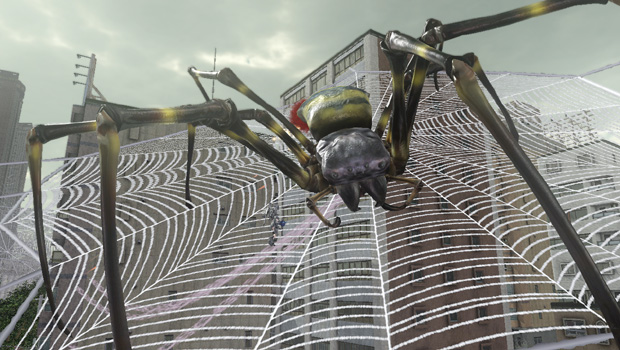 There’s a new Earth Defense Force game on its way, recently announced by D3 Publisher and Sandlot, and there are few things here at Tokyo Game Show that I was more excited to see. Here on the show floor, the Xbox 360 version was available to demo with six different missions to play.

The mission I chose was focused on the new type of spider enemy. In EDF 2017, spiders were among the most frustrating enemies in the game, bouncing around, firing webs and pulling you in every direction. The new spiders feature thick yellow stripes on their abdomen and produce massive webs that stretch between buildings.

The webs can trap you, as well as your fellow soldiers and civilians, and must be destroyed to liberate its captives. No movement is possible at all while in a web, beyond looking to aim. Spiders will still use their silk to try and drag you in (dealing constant damage as they do) and the webs now provide another obstacle to keep track of while this is happening, as the only thing worse than being pulled toward a spider is getting stuck, health draining away, and having to focus efforts on clearing a web.

Earth Defense Forces 4 is a direct sequel to 2017 and represents something of a return to form for the series, following the western-developed Insect Armageddon. Loot hunters will be happy to learn that armor power-ups and weapon drops are back in full effect, with lots of stuff littering the environment.

On the flipside, however, the destructibility of the environments has changed considerably. No longer can the player just fire a rocket at a building and watching it crumble to the ground as if part of a controlled implosion. I swear that I did see one such demolition, but subsequent efforts to take down a structure with as many as twenty rockets had no noticeable effect on my target.

I can’t decide if I like this element. From a gameplay perspective, the heartier buildings will make the game more challenging to play, forcing the player to run through the maze of streets in a city. But when I think about it as a fan of the series, I cannot help but feel just a smidge disappointed. I take a ridiculous amount of joy from the lack of realism in this element and I fear I’ll miss it in Earth Defense Force 4.

That said, the game does play well and it’s a significant graphical improvement over EDF 2017. With luck, we’ll hear soon from D3 that they’re bringing it out of Japan and into everyone’s homes.