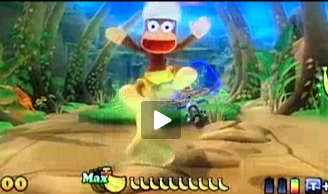 Ape Escape Move comes as something of a disappointment. I was really hoping for the reveal of a full-fledged Ape Escape game at TGS. Instead, we get a on-rails shooter with some motion-controlled fan slapping and net snagging thrown it. If this were a Wii launch title, then maybe Sony could get away with that, but as it stands, this isn’t all that impressive.

Well, at least they didn’t slip any realistic monkey-faced monkeys into the proceedings. Let’s hope they continue to keep it not-real when Ape Escape 4 comes into view. More video awaits you below.