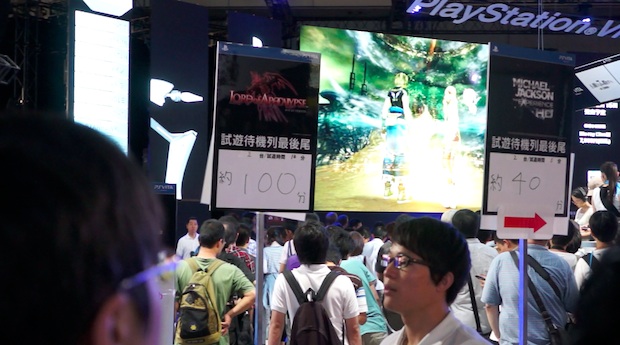 At Sony’s pre-TGS press conference they bragged that they’ll have 80 Vita units in their booth at the show. Some in the audience looked impressed. I was hopeful. Now, three days into Tokyo Game Show 2011, I’m just sad. Sad and hot.

I want to play all of the 20+ Vita games they have, but it’s impossible. I played a lot so far, but that was only through lining up and waiting it out. Today, the first public day, saw lines so long that they had to close some of them. As you see above, the wait to see Square Enix’s Lord of Apocalypse was 100 minutes long. Many others were just as long. That’s not even factoring in how much work it actually takes to get to the booth. If you want a taste of that hell, see the video below the jump.

Without a doubt, the PlayStation Vita was the hottest thing at Tokyo Game Show 2011. Literally.

P.S. I was sad to see that no one gave a sh*t about Lumines Electric Symphony on the Vita. I waited 70 minutes to play that for you!