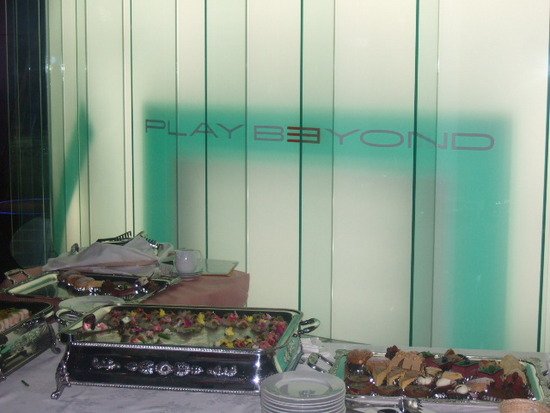 No rest for the weary travelers, as Team Destructoid trudged on towards Sony’s Pre-Tokyo Game Show Coktail Party. The invite only cocktail party (which took place in Sony’s United Showroom at the Sony Corporation building in Minato-ku, Tokyo) was a quick and easy way to get together foreign press for some private, hands-on time with some of Sony’s biggest PlayStation 3 titles. Throw in some finger foods, both red and white wine, along with some selected remixes of Bjork songs, and you have yourself a pleasant little event.

Some of the more interesting titles on-hand included Loco Roco Cocorecho, Uncharted: Drake’s Fortune, the EyeToy showpiece Eye of Judgement, and PlayStation Network titles like Pain and Everyday Shooter. Sony was even nice enough to set up some stations with Lair and Heavenly Sword, in case any of the videogame journalists at the even had somehow slept through the past month or two.

Bottom line, the cocktail event was less of a showcase for their titles, and more of an excuse to liquor up jet-lagged industry folks. You won’t hear me complaining — after close to 16 hours worth of travel, there’s nothing like turkey meatballs on a stick to close the evening. Or maybe they were made out of chicken …

Some highlights and sighting include: Sony’s Phil Harrison bumping into me on the way to talk to Kotaku’s Brian Crescente; the Spider-Man movie prop exhibit at Sony’s United Showroom must not be photographed, or you’ll be attacked by vicious, scarf wearing female Sony employees; we learned that it takes X-Play‘s Adam Sessler one or more weeks to deal with jet-lag; and when 9 o’clock rolls around, don’t hit your a** on the door on the way out. As Cheap D said: “Play Beyond, but don’t play beyond 9 PM.”

And while most of you are likely now just waking up, it’s time for us to get some sleep. Tomorrow, Tokyo Game Show will officially kick off, and we’ll be spending some quality time some games, both on the show floor and behind-closed-doors. Also, keep your eye out for Dale North’s feature on which TGS party was the most successful, based on food, alcohol, and game choices. It should be tastier than turkey meatballs, and the most relevant TGS coverage you’ll find anywhere else.

[Note to Edge Online’s Richard Stanton, who I have never met before: I noticed that your party pass was unclaimed, so I grabbed it for you. I also saved a turkey meatball for you, which I am keeping in in my hotel room until I hear from you. Get in touch with me to claim both the pass and the meatball!]