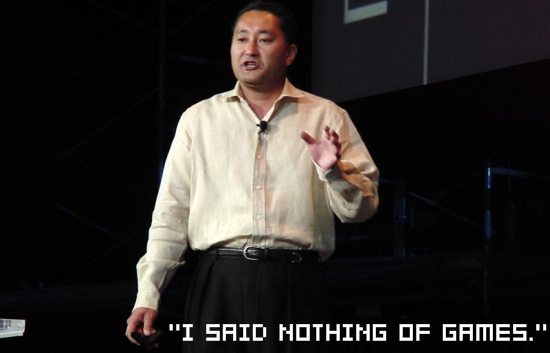 It was only a few weeks ago when Square-Enix called Sony out on its confusing marketing of the PlayStation 3, due to the fact that the machine was being pushed as a different type of system at different times. Is it a multimedia player? Is it a computer? Is it a games system? Just what demographic is Sony trying to reach with its schizophrenic marketing? Well, Kaz Hirai answered Square-Enix and straight up told us “The PS3 is a game machine.” Awesome, that’s settled then.

Seems that even after saying just yesterday that the PS3 is a game machine, Sony has once again changed its tune and is now pushing the console as a Blu-ray player this Christmas. Hirai did admit that pushing the console’s multiple functions is a “balancing act,” and Sony definitely needs to be careful, because trying to do too much leads to confusion. “The PS3 is first and foremost a videogames machine but we want to say – by the way, it’s a great Blu-ray player as well,” Hirai stated. To be honest, I don’t think that message has ever been in danger of getting lost. We’ve heard it plenty of times in the past.

Sony recognizes it has to be careful, but how careful will it actually be? We have to remember that gamers typically don’t care much for format wars, they just want a good game library. Both of the previous PlayStation incarnations proved that superior hardware means nothing in the face of superior software. We’re all well aware that Blu-ray gives us the best Talladega Nights experience one could ask for, but now is the time to promote the games.