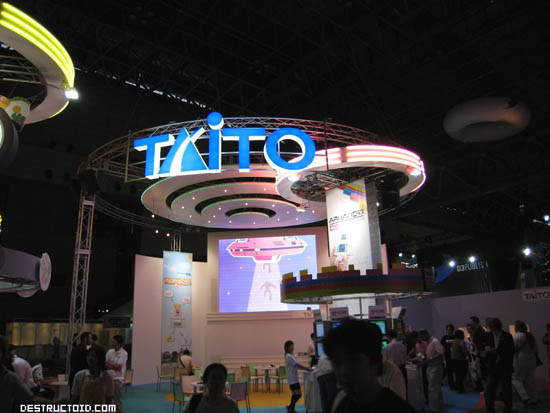 Continuing with our 2007 Tokyo Game Show booth tours, we bring you pictures from the smaller booths of Takara Tomy and Taito.

While the Taito booth only had a few playable games for show, the ones they did have had no problems drawing in attendees. Arkanoid DS let players try out the remake of the classic game, complete with a miniature paddle wheel. Cooking Mama was back for a second course, cooking up more of her simple yet addictive game play. Also, no one could exit Taito’s booth without giving the new Exit a try.

The Takara Tomy booth was like a shrine to anime and fighting titles, with various Naruto titles and Katekyoo Hitman Reborn!! taking up most of their floor space. Attendees could also give the Wii version of Choro Q a spin. The Game of Life, Major Dream, instructional cooking titles for the DS, and several other blatantly Japanese games filled this booth.

Check out the gallery of pictures from these two booths below.