For everything we loved about the playable demos of Final Fantasy XIII at this year’s Tokyo Game Show, there was bound to be a few things that didn’t jive with us. Nothing’s perfect, as they say.

Square Enix’s next big thing is shaping up to be great, but we had a few gripes after our demo sessions this week. I will say now that I don’t think that any of these below listed items are deal breakers. Even though we’ve only seen three demos of the game since it’s announcement, I think it’s safe to say that Final Fantasy XIII will be a pretty solid game.

They haven’t shown us what the odd sports-based or skill-based subgame will be, so I can’t gripe about that one yet. I’m sure whatever it is will be terrible, though.

I don’t like the camera
For as polished as Final Fantasy XIII is looking and sounding, it’s worrisome that the in-game camera is floaty and imprecise. Just like in Final Fantasy XII, you’ll control the camera with the right analog stick. Sometimes getting your bearings is disorienting, never mind trying to peer around a corner as you walk. While I realize that this is a role-playing title and not an action game, you’d think that there would be tighter camera control for a game that lets you evade moving enemies as a game play element. In more than one instance I found myself actually walking into a monster while trying to avoid them. Fix this, Square Enix.

I don’t get the action points
While I get that they wanted to eliminate the need to jump on the overworld map, the little blue circular swirling light action points seem unnecessary. I believe that I saw these action points listed as game features in the past. Really? They’re nothing more than a visual guide to tell you that you can access another part of the overworld. The problem is that they’re placed in places that are obviously created to look like the gateway/doorway into the next area. They’re more of a distraction than a help. 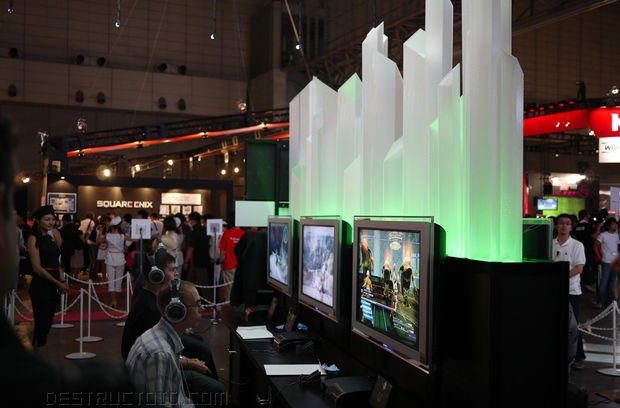 I don’t like the generic enemies
I realize that these are only demos, but I’m already tired of the Final Fantasy-typical enemies already. Robo-cat things? Why? Why are they here? I seriously doubt that the game’s story will explain why robo-cats attack you when you pass by. At least the canary yellow faceless military men make a bit more sense in context. They’re still annoyingly generic, though. Other enemies included the random strong guy and the sewer-based slime. These almost seem like cop-outs when compared to the game’s setting and battles.

I can’t take the sensory overload in battles
What. The. Hell. Is. Going. On? While I’m glad that we’ve moved away from tiny hit point damage counts, the big-assed futuristic font used in Final Fantasy XIII might be too big. There’s a lot going on in battles, and these big numbers just add clutter. I appreciate that they try to keep battles dynamic and exciting, but with multiple party members moving around you and enemies flying overhead, it’s hard to keep track of what’s going on. Big characters in the mix make it worse. Summon Odin into the party and things reach an even higher level of confusing. Unfortunately, some of this is also related to our first gripe, the camera.

I don’t like the lack of the victory theme song
Where’s the Final Fantasy “Victory” theme that we’ve come to expect post battle? Maybe they just left it out of the last three demos? Let’s hope so.