There’s a lot to like in the new Tokyo Game Show floor demos of Square Enix’s upcoming epic, Final Fantasy XIII. We thought we might tell you what we liked about the demo rather than give you a boring play-by-play recap.

What’s being shown here is quite a bit more deep than the short demo that was released in Japan earlier this year alongside the Final Fantasy VII Advent Children Blu-ray release. From the looks of the demo stations, these demos are running discs on PS3 slims, meaning that they’re probably in the later part of development. Good news, I’d say.

There’s actually two demos playable here between the various booths showing it. One features Snow and the other features Lightning. Both are fantastic. I played through both twice to really get a feel for the demo.

I like that summoned creatures are also vehicles
We’ve already seen fighting alongside your summoned in an earlier Final Fantasy game, but XIII ads a twist in that you can also transform this helper into a vehicle. I love that someone came up with an insanely crazy idea and was happy to throw reason out the window to see it through. In Lightning’s demo, I was able to summon Odin. He’ll fight alongside you as a powerful ally, but it’s much more fun/funny to see him transform into a horse. A tap of the square button brings about this riding mode, and his horse gallops in on a bed of rose pedals from the sky in a perfect spiral.

Surely you’re already familiar with Shiva’s menage a trois motorcycle action. It’s two guys and one girl in this case, as Snow was the summoner. Finally seeing the union in person on Sony’s high end displays was both hilarious and strangely arousing. After assembled, one battle command lets you ride your woman-bike up onto the face of your enemy. How great is that?

I’m glad that over-the-top is back
It seems like the Final Fantasy team threw up their arms and said “screw it, we’re doing what I want.” I think the game is better for it. Final Fantasy XIII embraces the series’ former over-the-top feel with everything from the previously mentioned crazy transformations to the big sounds and sparkling visuals. They did not hold back, and it shows. 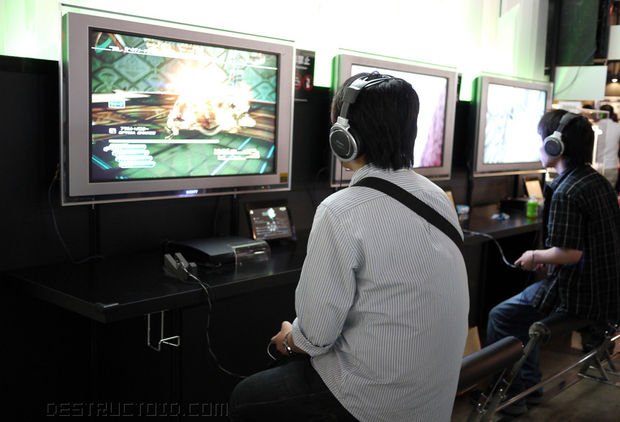 I like that battles are fast and simple
For as much as I liked Final Fantasy XII, one thing that held it back for me was that I had to think too hard about the battles. It took me out of the game and its setting a bit. Final Fantasy XIII‘s battle system gets back to fast-paced battles and yet still manages to keep strategy and balance in mind. Taking away the need to think about positioning in battle has let Square Enix make FFXIII‘s battles more dynamic and cinematic. One sub-boss battle I played started out in a constricted area, but then later moved to a more open space, keeping things interesting. All I had to worry about was my attack choices.

I like the cutscenes
Are we done badmouthing games with lengthy cutscenes? Apparently the folks at Square Enix weren’t worried about that at all. All three of the Final Fantasy XIII demos I’ve played have proudly put forward their impeccably crafted story clips. Are they good story clips? I don’t know yet, as they don’t give enough context to judge. They sure are beautiful, though. Square Enix has embraced Blu-ray, and the new (and somewhat lengthy) scenes I saw were a multimedia tour-de-force. The Japanese voice acting was exemplary and the motion-captured characters brought a level of immersion unseen in previous titles.

There’s still that old treasure box trap
In Final Fantasy XIII‘s futuristic world, treasure boxes look completely different. Now they’re floating orbs with a handle on them that dispense goodies. What hasn’t changed is that old trick where you’ll go up to and open that tempting treasure box only to find that a monster was hiding in wait, ready to attack you. That’ never gets old.