People are so quick to write off role-playing games these days. I still like them, but it seems like the general gaming public  is done with anything that looks formulaic. I had high hopes for Resonance of Fate (called End of Eternity here in Japan), and after the demo I played today at Tokyo Game Show, my hopes have been set even higher.

Resonance of Fate is a tag team effort between tri-Ace and Sega. It’s clear that the team wanted to do something different, but again, gamers were quick to write off early screens and footage, calling this game a “RPG with guns.” It’s true; there is gunplay, but the battles play out so differently that I think those weary RPGers might want to take another look.

In a busted planet Eart, a machine-heavy area called Basel is the setting for Resonance of Fate. This world dumps swords and spells for guns and grenades. Turn-based battles? Not really. Combat is in something close to real time, and requires placement strategy in a battle area.

If you were to watch the game being played, you might not be sure what’s going on in battle. You’ll see players running around a field, shooting enemies and being shot, all while rings of light and dotted lines fly about the screen. It all looks fantastic, but i didn’t get what was going on until I gave it a spin. 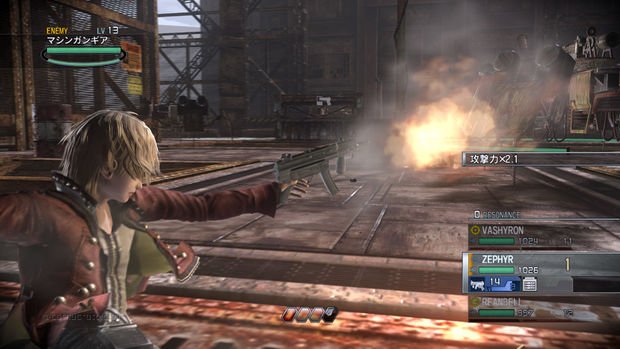 Nice, but much more impressive in action.

I had full control of the movement of one of the characters in my three-person party. That freedom to control runs out when a time meter by that character’s name expires. I could either move or shoot in that time frame, and then move on to do the same with another character. If just pointing a cursor and shooting doesn’t sound like much fun to you, you can opt to perform a nifty alternative attack that has you doing aerial firing and all kinds of flashy stuff. The invincible attacks let you point that dotted line towards an enemy. You’ll be able to run along that line, firing off shots until your meter runs out of juice. These attacks involve mid-air flips and fancy flourishes that make it look like you’re doing something intensive with the buttons. You’re not. And by crossing the dotted lines of multiple characters, even fancier attacks will be initiated.

The character design and scene is just as fresh as the battle system is.  The game’s world is a bit rough, and isn’t as frilly and shiny as, say, Final Fantasy XIII’s. The characters look like they had some real thought put into them, too. Male characters Vashyron and Zephyr look to have a bit more depth than your typical protagonist bad ass types, and the lovely Reanbell looks like the kind of girl stalkers follow. No generic faces here, though.

Almost nothing was given in the way of story line or other details. A story trailer being shown in the same area as the game demo showed a large and varied cast, but it was difficult to tell what was going on. A character named Subject #20 sounded pretty mysterious. The video also showed weapon customization in action, but also didn’t go into any detail.

Sega and Tri-Ace gave us just enough to be interested. Resonance of Fate certainly looks good, and it seems that they’ve succeeded in making something different as far as combat goes. Let’s hope that the story can also break away from the cliches and serve the RPG weary something new.