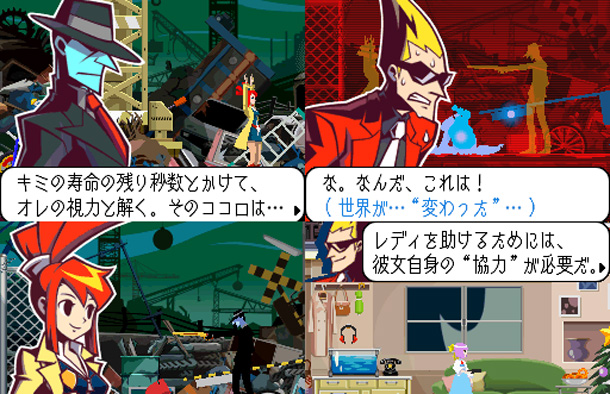 That’s what the folks at Capcom told me. And sure, I like the Ace Attorney games, but what does Ghost Trick have to do with anything? I mean, it’s a great looking game, but I don’t see the connection.

Now that I’ve had a closer look at the game, I get where Capcom is coming from when they say that Ace Attorney fans may dig Ghost Trick. It comes from the Ace Attorney creators, and while it may not have the courtroom scenes, there’s still a mystery to unravel. The major difference here is how you’ll unravel things.

You play as Sissel a guy, a spirit of a guy that just died. As a spirit, you can hop into and out of inanimate objects and possess them.  In this demo, he would use this ability to help someone else that was about to die from a gunshot coming from the very same man that killed Sissel.

Your spirit is controlled by the DS’s stylus and touchscreen. Sissel’s spirit can be dragged into other objects laying around the scene of the incident. The possession isn’t a direct control, though. You’ll find that you can only do what that object could normally do. Possess a guitar and it can only make a sound. Possess a gate door and it can only open and shut.

The point of item possession is to prevent the next crime from happening. Unfortunately, in this case, the crime goes down anyway. All you can do is make the most of possessing object to try to fix what happened or is going to happen.  Even though I was not able to properly see this mechanic for myself, I was told that Sissel would use item manipulation to rewind time and change the victim’s fate.

Ghost Trick’s visuals were very stylistic and bold. It’s cell shaded but has a very retro vibe about it. The animation is the most notable aspect of the visuals, though. Movement was unbelievably smooth for any game, let alone a DS title.

Although the Japanese-only text-heavy game was hard to follow at times, I got the general idea of the game play. In essence, you’re still poking around a crime scene to figure out what happened. The difference here is that you can actually make a difference. Capcom says that they are planning on bringing Ghost Trick to North America, so we’ll look forward to an English trial soon.