Tales of Graces, one of the two new Tales games, certainly looked crisp and pretty when I walked up to the demo station at TGS this morning, and even though my experience with the Tales series is very limited, I did know that this entry in the series is a much-anticipated one for fans of it. Boasting to the longest title in the series to date with up to 70 hours of story and gameplay, it certainly seemed like something worth checking out.

Hit the jump for more details on Tales of Graces.

As usual, the Tales games have some nice lore if you’re into that sort of thing. Asbel Lhant, the main character, is the oldest son of a fuedal lord and dreams of becoming a knight. However, other circumstances lead him down a different path, and he finds himself following in his father’s footsteps.

Playing Tales of Graces, for me, was a lot like playing Tales of Vesperia except, well, less pretty since this game is on the Wii. No, I’m not hating, but considering this demo was set up right next to the PS3 Tales of Vesperia demo, you couldn’t help but look up and compare the two at one point or another. However, Graces does look nice. The cutscenes are especially notable, with the same colorful style as Vesperia. 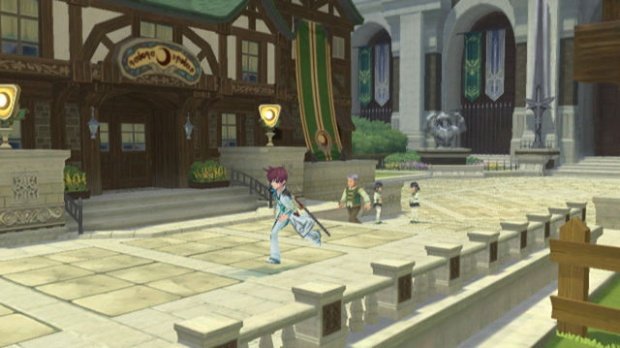 In the demo, I ran around the field a bit on my way down a road and encountered a few battles. Each of them taught me something new about the battle system — in Japanese. However, from previous English info I did already know that this game used the SS-LMBS, or the “Style Shift – Linear Motion Battle System”. What it basically allows you to do is set one set of skills to A and one to B and alternate between the two freely. The Chain Capacity Point System used in Tales of Destiny‘s PS2 remake also comes into play here.

Fighting is very active and seems fun, but it got a tiny bit repetitive by the end of the demo. Of course, I was unable to read the comments and bits of story in between from my party, so I feel that would have made the experience a lot more fun for me. I especially liked the character animations after battles — they had a lot of personality and seemed well varied. As of TGS  the game is 80 percent complete, due out in Japan later this year. No idea when we can expect a US release date, but we’ll keep you posted as soon as we know more.