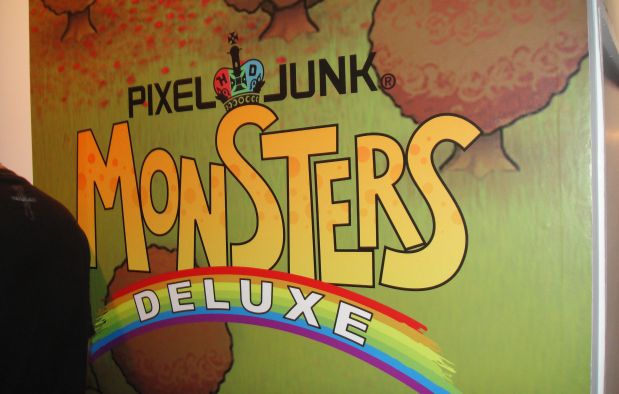 You my have heard me say it before, but no fear if you haven’t because I’m about to say it again: PixelJunk Monsters is a perfect game to me, and in addition so incredibly addicting and satisfying that after completing it I purposely erased my save so I could start from scratch and repeat the experience. It’s not often you have the pleasure of enjoying a game so much you actually want to do that, which is why word that PixelJunk Monsters Deluxe was on the way sent shivers of anticipation down my spine.

To hear about my hands on with this enhanced version of the game, hit the break.

Deluxe was playable on the TGS show floor on the PSPgo, which I was happy to see as I wanted to get a feel for how it would handle on the portable device versus the PSN version I was used to. While it took me a minute or so to get used to moving my map around with the shoulder buttons rather than a pair of analog sticks, once I adjusted it handled just fine.

I started by playing one of the early levels, which was identical in layout to the original Monsters. What differed, I noticed right off the bat, was my available tower selection.  Unfortunately the names of these new towers were in Japanese so I can’t tell you just yet what they are officially called, but in order to build them you need to save up some gems first. I bought one tall narrow one that appeared to shoot a laser-like shot at invading creatures, and there were several more to choose from that I didn’t get my hands on (yet, anyway).

Another unusual feature that’s new to Deluxe was the addition of a new selection wheel of what appeared to be emotion flags. For instance, I chose one with a heart on it. My Japanese booth attendant was motioning wildly for me to use this wheel and get one, but once I did I wasn’t quite sure what effect it had on the actual gameplay. Luckily, I was too busy having fun reliving my first playthrough of the new version to mind much about the language barrier. Heart flags, you say? I’ll figure it out later!

If for any reason you missed this game on PSN and are looking for some good games to grab when the PSPgo launches this October 1st, PixelJunk Monsters Deluxe would surely make a good candidate. Then you can be like me and find yourself alone at home doing a little a dance in front of something and wondering why it hasn’t leveled up yet.