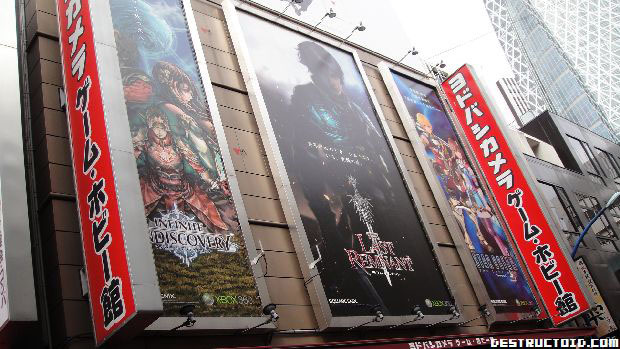 If you know anything about Japan’s gaming culture, you may already know that giant billboards advertising upcoming releases are commonplace to them, but considering that the first time I saw a Final Fantasy ad on the side of a building was during this year’s E3, they’re still kind of a novelty to me.

As we walked around the streets of Shinjuku this morning, I made a point of taking photos of all the game ads I saw (even as the natives stared at me and wondered why I was doing so). There were a few really notable ones, but my favorite by far was the tall skinny Bayonetta ad you see in the gallery. Talk about ass for days!

I’ll have more of these photos to bring you soon enough, but I thought you might like to see a few for now. Also, Dale’s about to take out his junk and start humping that poster of Lightning from Final Fantasy XIII. Can’t say I entirely blame him — she does look like she could kick a whole lot of ass and somehow still manage to look cool, calm and collected.