First off, if you’re looking for dirt, you won’t find much here. Both upcoming racers Forza Motorsport 3 (Xbox 360) and Gran Turismo 5 (PS3) are sure to be great racing games. That said,  I think there’s a clear winner here between the two high-profile racers shown on the floor of Tokyo Game Show this year. As you read on, keep in mind that we’re not comparing the games themselves as much as we are the demos shown on the TGS floor.

Both were in pretty nifty setups. Gran Turismo 5 had real-world racing seats built into metal frames. Inside, players sat in front of a high-end Sony display while controlling the game with the GT steering wheel set. Forza 3 was played on a three-screen setup. They too had racing chairs and a steering wheel controller. Putting all of that aside, though, which was the better game?

Visuals:
Winner: Forza Motorsport 3
While both games look great on the track, Forza‘s demo featured a polish that Gran Turismo 5‘s lacked. The rocky hillsides and lush greenery easily showed up the bland, almost clinical-looking cityscape of Gran Turismo. Driving slow in Gran Turismo is like inviting disappointment. I guess they were hoping you’d always be moving fast enough to not notice the perfectly flat tree and pole textures. Plants and trees on the side of the road look like paper cutouts, and the tree trunks are laughably bad.  As far as the vehicle visuals go, neither game disappoints. Both supply unhealthy doses of car porn. The tighter racing action of Forza 3 made it easier to appreciate the models of the cars I raced against, but both pull off amazing feats as far as visuals go. Forza’s framerate was liquid smooth, making it a bit easier on the eyes than GT5.

Control:
Winner: Forza Motorsport 3
Solely judging from the two on-floor demos,  both of which used adjustable racing seats and steering wheel rigs, Forza 3‘s control won the race. There was something about the balance of control that made it seem especially intuitive. I’d go as far as to say that it felt damned near flawless with the steering wheel rig they had set up at each demo station. Gran Turismo controlled great as well, with the tilt leaning farther away from arcade action and more towards realism. Nothing was notably wrong with Gran Turismo‘s control. It’s just that the seamless feeling that we felt with the controls in Forza wasn’t there in GT5. 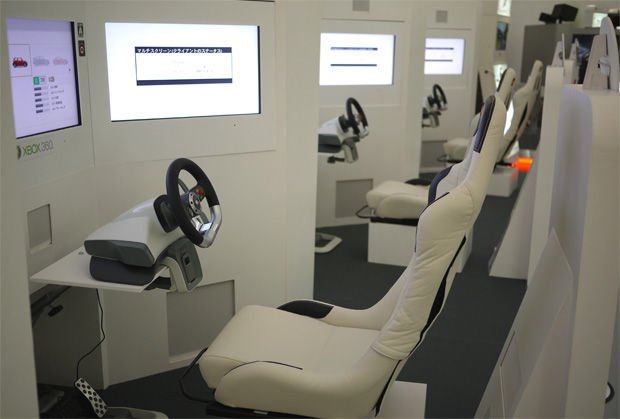 Game play:
Winner:  Forza Motorsport 3
Both games were played on a rather easy track, and both featured racing line guidelines. Other than that, these two games play differently. Forza 3 had me racing against other AI characters that were way too easy to pass, even with the option to set the difficulty. My choice of a medium difficulty looked more like an easy to my eyes. I didn’t try the “hard” setting, but I hope it’s considerably more difficult than medium was. That said, some of the credit goes, again, to the seemingly flawless control of the game.

As for Gran Turismo, I watched plenty of others wipe out and give up before I played. It looked like people that had never played the series games before sat down and expected arcade racing. As always, Gran Turismo 5 had that realistic acceleration and turning that greatly contrasts to the loose, forgiving controls of other racers (Forza 3 not included, of course). I enjoy the challenge and learning curve, and prefer the rewarding stick-to-your-ribs racing that it provides. Even with that, though, Forza‘s gameplay was more enjoyable and approachable. It may be a bit more simple than that of GT5, but it still provides ample challenge for white knuckle racing.

If you have to have damage modeling, you want Forza 3. It’s just not there in Gran Turismo. While I don’t believe that it’s a necessity to have damage modeling in a racing game, it is an added bonus. If you play in first-person view like I do, it’s fun to see how messed up your vehicle is after a race. Gran Turismo doesn’t do that. In fact, side of the road items like cones and tires don’t even seem to be affected properly by impact. When I ran into a stack of tires, they seemed to float strangely in front of my car for a second before flying off to the right. I don’t need true-to-life physics on these types of collisions, but this looked closer to the movement of a UFO than a stack of rubber tires.

Overall:
I’m a big Gran Turismo fan, so it was a bit of a surprise to me that the Forza Motorsport 3 demo did more for me. Things like damage modeling and background art aside, it was the superb control and high level of accessibility that won me over. Forza 3 was just more fun. More impressive. Of course, this is not to say that Gran Turismo 5 isn’t a good game. It will be great, I’m sure, but Forza 3 show floor demo has me wanting to race again. I need to get me one of these three-screen setups too.