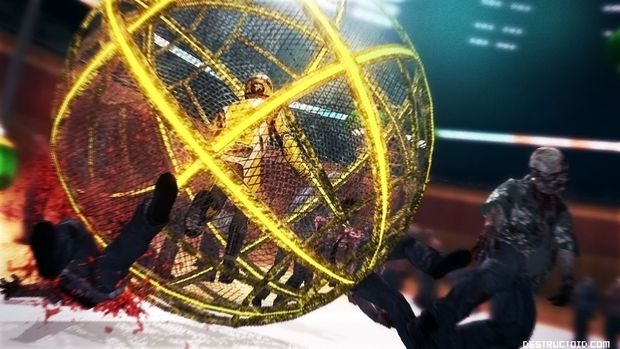 You probably saw the trailer earlier and thought “What the f*ck is going on with Dead Rising 2? Because, uh… what?” Well, what you were looking at is Dead Rising 2‘s multiplayer component, and we had a chance to play it on the Xbox 360 at an event in Tokyo today.

While Capcom was quiet on the context, producer Keiji Inafune was able to tell us that Dead Rising 2‘s main character Chuck Greene is a contestant on a reality television show called Terror is Reality. Inafune went only as far as saying that Chuck has his own reasons for participating, but wouldn’t give details as to why or how Terror is Reality will play into the game’s single-player story mode.

What they were able to reveal is a multiplayer “Terror is Reality” mode, set up for four-player action linked across systems at the event. While we only played four-player matches, Capcom did say that the number of players supported in the final game was “undecided.”

So what’s the deal with the hamster ball or that funky looking motorcycle helmet with antlers on it? Details after the jump.

Terror is Reality, a game show hosted by the pimp-like Baby TK, is broken up into four modes that are played in succession — “Ramster Ball,” “Headache,” “Pounds of Flesh,” and “Slidecycles.” The goal is to rack-up as many points (or cash) as possible across the four rounds, Before you go any further, please note that if you have no tolerance for the ridiculous, you might want to stop reading now. Because while it’s fun, “Terror is Reality” may be one of the most absurd and unexpected modes of any game. Ever.

“Ramster Ball” puts each of the four players (yellow, blue, green, and red) inside their own large, steel hamster ball. They then drop into a bowl-like arena, using the analog stick to roll around and the X button to sprint. Placed about the arena are pinball machine-like bumpers that cause whatever is inside the cage above it (read: zombies) to be crushed. The goal is become the “it” ball, which turns each of the bumpers your color, giving you the ability to activate the bumpers, which is the only way to score points.

Of all the modes, as you’ll soon see, “Ramster Ball” was the most confusing. In fact, we were so confused that it wasn’t until the entire round was over did we realize what we were supposed to be doing. We spent most of the round chasing the “it” ball just so we’d have a chance to score some points, when what we really wanted to do was to be killing zombies. Lots and lots of zombies.

The second game of the bunch is called “Headache,” which should fulfill your zombie killing needs quite nicely. In the center of a field of zombies is a machine that dispenses hats. Only the hats in this case are — are you sitting down? — blenders you can put on the heads of the undead. Each trip to the dispenser gives you three blender hats at time. Once the blender hats are in place, players must run to the outer rim of the playing field where they’ll hit a button. This activates the blenders, scoring points… and tearing zombies heads to pieces. Players can also drop a stick of dynamite on the field to blow up zombies, scoring points for killing undead that are wearing their competition’s blender hats.

Next up was “Pounds of Flesh.” Each player starts off wearing a motorcycle helmet equipped with giant metal antlers. The idea here is to ram into as many zombies as possible, knocking them onto a giant scale; once you’ve cleared your area of zombies, you simply hit a red button to “reload” your zombie cache and begin loading the scale again. The player with the most weight in zombies at the end of the round wins.

You’ll have a few attacks with the antler helmet, like a typical nudge that knocks zombies back. But even more effective is holding down the attack button and running into a crowd. Releasing the button causes the player to “flick” anything in the way, sending bodies flying straight ahead, preferably onto the scale if aimed correctly.

The final round, and the deciding game, is the simplest of them all and perhaps the most satisfying. “Slidecycles” has players hopping on a motorcycle mounted with chainsaws on both of its sides. The goal is drive the chainsaw into crowds of zombies in the arena, racking up points for each kill. Some zombies are worth extra points, marked with a big pink balloon on their heads. American Gladiators-style, the round starts players receiving time bonuses, giving them more time to pick off the hordes of the living dead. The winner of this round takes all.

Taken out of context, this collection of multiplayer modes in Dead Rising 2 sounds ridiculous. But whenever Capcom decides to reveal how the Terror is Reality television show fits into the game’s story mode, we highly doubt it’ll be any less ridiculous.

But Dead Rising has always been about over-the-top fun, never taking itself too seriously, while giving players the opportunity to slaughter hordes of undead in as brutal and gory a fashion as possible. In that respect, the “Terror is Reality” mode looks like it’ll be a success. Despite the fact that we’re told leaderboards will probably be associated with the mode when the game ships, we’re just not sure if the mode will have a long term appeal. But any games mode that has players weighing zombies and running them down in a steel hamster ball is okay in our book.