Wheelchairs with machine guns mounted to them? Check. That’s in Dead Rising 2. That’s a real thing.

Dead Rising 2 has the least handicapped handicap vehicle ever and plenty more craziness. We had a chance to check out a small single-player teaser of this zombie-packed sequel at a party Capcom threw for the international press attending Tokyo Game Show. We killed hundreds of zombies to bring you this preview. It kicked ass.

Yellow-jacketed Chuck Greene is locked in a casino. So are hordes of zombies. Why is he in a casino? We don’t know yet, but we do know that there are plenty of new and interesting ways to kill zombies in a casino. The single-player demo didn’t give much in the way of story, but it did show us that the game play feels exactly like its predecessor, Dead Rising. This is a great thing.

What we saw of the new zombie sandbox game looks great. I think there’s more blood splatter this time around, and it seems like zombies can die in more ways. Hold down the X button with a sword equipped and zombies slice clean in half, with both parts falling to the side, guts cross section displayed. Impaling zombies with a swordfish? Why not? Chuck may have some moves that Frank didn’t, and we can’t wait to see what else he will be able to do. 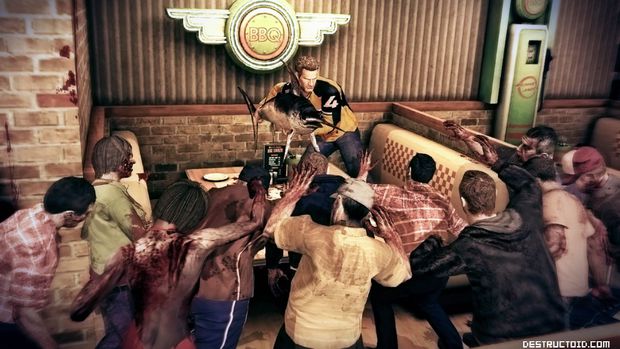 Swords, kitchen knifes, and iron pipes now join roulette wheels and stick ponies as weapons. In the demo, we had ten minutes to try to survive in a posh casino that just happened to be overcrowded with undead gamblers. Zombie dealers stood on blackjack tables and zombie patrons lumbered around slot machines. These and other zombies are just asking to be smashed over the head with a roulette wheel. I jumped behind the bar and took more out with a heavy machine gun, and then I followed up with the chainsaw for old times’ sake.

In this particular casino, there’s a mechanical bull to ride. It’s difficult to stay on, but we’re told that you’ll get stat increases if you manage to hold out for the full ride. Other smaller side experiences will be scattered throughout the game. Apparently there’s a money booth button mashing minigame that you can get into somewhere, we’re told.

There’s more to life than just surviving, though. In our session, if you were to net 300 zombies killed, a gift bonus would be unlocked. Survive the full 10 minutes and you’ll get to unwrap the lovely gift: a wheelchair mounted with multiple machine guns. Wheel yourself around and auto-slaughter oncoming zombies with ease.

The goal at this event was to see how many zombies could be killed in 10 minutes. I was too busy being happy that I was playing Dead Rising 2 to notice what my total kill count was. This may have been just a small taste, but this sequel is looking and playing great. Oh, and there’s multiplayer, and it’s even more crazy. More on that later.