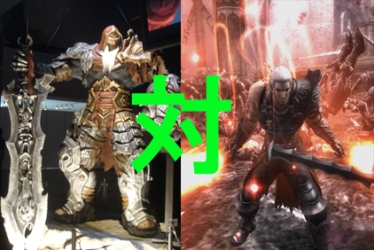 Darksiders being one of the games I was excited about playing at TGS, I moseyed over to the Konami booth, where it was wedged in next to Silent Hill: Shattered Memories and Ninety Nine Nights 2.  To be honest, I had no interest in the games other than Darksiders, but Ninety Nine Nights 2 sure did look pretty. I also remembered reading that Tetsuya Mizuguchi’s Q Entertainment worked on it. I’m a sucker for a pretty girl with a pedigree so I dropped my original plans and dropped into the zero-minute-wait line for N3 II.

Colette has already dropped some killer impressions of the game and nothing I experienced contradicts what she saw. It sure is pretty, but boring. My time with it lasted ten minutes and consisted of pounding the attack button with one hand while using the other to fish in my pocket for change. I managed to kill 1000 men this way.

Hoping for an action game with some variation, I walked the 20 feet to the Darksiders line. First impression: Pretty art, though it reminds me of World of Warcraft. I can’t be the only one who looks at the main character, War, and sees Arthas, can I? I have a bit of a wait before I can play the game, so I strike up a conversation with the Japanese booth attendant, who is male and looks to be about 17.

“Don’t you think War looks like Arthas from World of Warcraft?” I ask.

“I’ve never heard of that game.”

This is totally fair, as the game has never been released in Japan in localized form, though some hardcore fans buy the English version and play it. I decided to take a different tack.

“I just played Ninety Nine Nights 2. Which do you think is more interesting?”

“They are both about the same”

“But that one is just button mashing. You don’t even need to look at the screen. At least in Darksiders you can grab stuff with your big arm and throw it. And there are platform elements”

The guy was not really working with me. There had to be way to open him up.

“So of all the games here at the show, which do you think is the best?”

“Well, I’m working for Konami, so I can’t really say”

“Is it either of these two?”

So, it would appear that both games face an uphill battle in Japan. One is an action game with button mashing monotony and the other is “about the same.”  My own hands on with Darksiders left me a little more satisfied than Ninety Nine Nights 2, but only barely. Other than the bright art style, everything else about the game was quite generic. My verdict: wait for reviews on both. Or just go buy FF XIII.