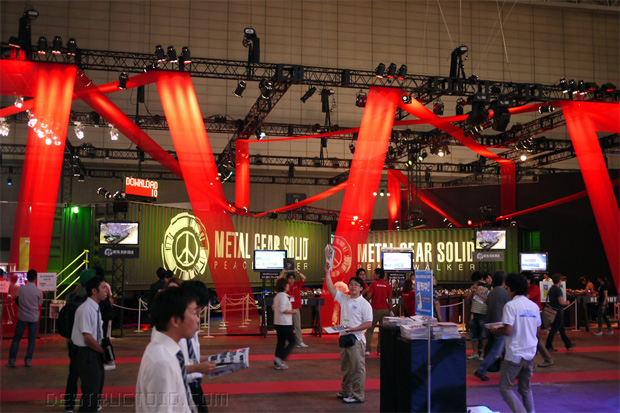 If you want the word on the show floor, it’s that the 2009 Tokyo Game Show is a bit more subdued this year. There seems to be less booths on the floor, and less energy to go with it. It almost goes directly against the show’s slogan for this year, “Game: It’s so energetic.” There’s a tad less booth babes, and there’s a bit less of a buzz overall. It’s not to a point that it’s disappointing or anything, but it is definitely noticeable. One unnamed developer told me that smaller companies were just not interested in laying out the cash for a booth this year.

That said, there are still huge, crazy booths, booth babes, and high-profile new titles to tackle. We’re knee deep in new games already. To hold you over, we pulled together a quick glimpse at the show floor this year on this first press-only day, so that we can get you clear images, free of crowd obstruction.

Sony and Microsoft have really huge, nice booths. Sega has a great one as well. Konami’s booth is very pretty; it’s wrapped in crimson red sheets, as you can see above. The Square Enix booth is pretty tame this year, despite the booth’s size. They did dedicate one massive corner of their booth to Call of Duty: Modern Warfare 2, which they will be publishing in Japan. Check out these and more in our gallery below.