When I was getting ready for the Tokyo Game Show, I had no clue about the types of games I wanted to cover. There really is so much here and you can’t get your hands on it all. I did know, however, that Sonic Unleashed was going to get played at some point. I grew up with that tragic blue sod, it’s only natural.

I tried to keep my hope for this one rather quiet, as the consistent disappointment that Sonic games bring to the fans has become something of a self parody. However, I must confess that with Sonic Unleashed — Sonic World Adventure in Japan — I was still keeping a glimmer of positivity alive.

So, having taken on two levels and gotten to grips with both regular speedy Sonic and his werehog counterpart, have my hopes been reignited, or dashed completely? Also, what was it about this hands-on session that proved me right? Hit the jump and find out.

I can’t understand Japanese, so it took a while for me to get the attendant to start the bloody thing up, but once we got through the near-traumatic process of choosing a level, I found myself starting out with our familiar, pint-sized, regular Sonic the Hedgehog. 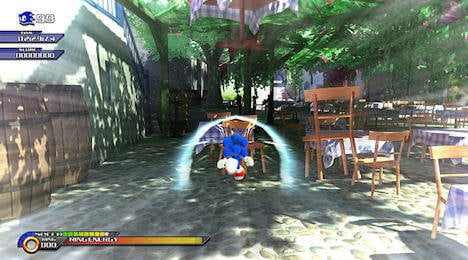 The first thing that strikes you with the game is how truly beautiful it is. The bright sunshine, the strong and vibrant colors — this really is a gorgeous looking title. Colorful games always stand out in this modern age of dark grittiness, and Sonic Unleashed manages to stand out even among those.

The gameplay that was on offer, sadly, was not quite as breathtaking as the visuals. While not a bad experience, Unleashed certainly suffers from one of the glaring faults of recent Sonic games, in that the levels are so fast, you feel like you’re on autopilot for much of the time. There are vast sections where you do little more than run and occasionally jump, nothing that approaches the clever level designs of the old Sonic games.

Sega has certainly tried to spice things up though. There are brief Quick-Time-Events that hit you as you speed through the level and you’re encouraged to pay attention if you want to get through each section perfectly. In fact, it could almost be argued that these “speed” sections are not about challenging the player in a traditional way, but rather challenging the player to perfect one’s progress through the stage. It has to be said that narrowly ducking under low walls and bouncing off enemies to make it across chasms may not feel completely interactive, but it does feel incredibly cool. 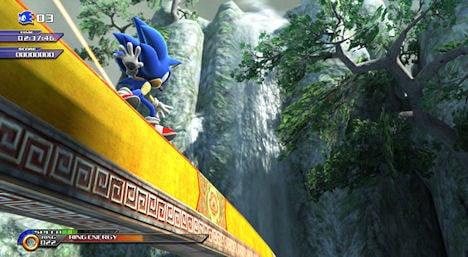 If you approach these speed sections with an eye to looking stylish and perfecting a run, as opposed to being challenged by puzzles or enemies, then the stages featuring regular Sonic become a lot more fun.

This is helped by the fact that the terrible design issues present in 2006’s Sonic the Hedgehog seem to be all but gone. For once, the homing attacks work perfectly, and every time I had to bounce off a row of enemies to cross a hole, I managed to do it without a problem. Previous games were also faced with the problem of having too many cheap pitfall deaths thanks to the ridiculous speed of Sonic and the lack of protection from long drops. Again, this seems to have been addressed and I only found myself suffering from a pitfall death once — which was my own fault.

A lot of the speed stage is viewed behind Sonic, but the perspective changes to a 2D vantage point or more dramatic angles quite frequently. It’s surprisingly seamless and doesn’t tend to throw the player off, with well-timed camera shifts made to coincide with less interactive portions and then zipping back behind Sonic smoothly when there is movement to be had.

My opinion of the speed stage presented at TGS? Honestly not bad at all. A little shallow, but it looks and feels very cool. 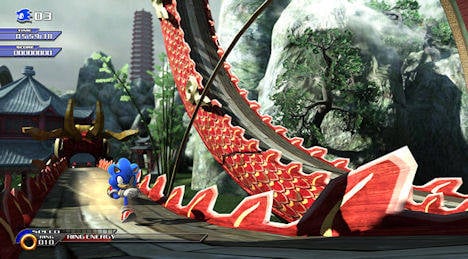 Which brings us to the “Sonic the Werehog” stage and the reason why I am right. A lot of people have complained about how the Werehog is a bad idea, how it will break the gameplay and ruin the experience. In the words of Andrew Ryan, I rejected those answers. I instead predicted that the Werehog levels would prove to be the best parts of Sonic Unleashed, and it was certainly the best part of this demo.

The Werehog stage presented on the showfloor plays something like The Prince of Persia: The Sands of Time, with gameplay broken up into environmental navigation and close quarters action. The combat is very simple, but solid. As the Werehog, you have access to weak and strong attacks, and you can combine strong attacks with different numbers of weak ones in order to create more special moves. You can also build up a special “unleash” meter which I would presume makes Sonic more powerful, but I barely got to use it. All in all, the fighting is far from innovative, but it is tried and tested and Sega has managed to not find a way of mucking it up. 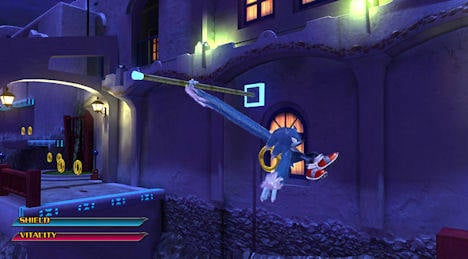 One of the traits of Sonic the Werehog is his stretchy Dhalsim arms, and he puts these to good use in a fight. Smaller enemies can be grabbed with a quick button press, and throw or twirled around to smack other opponents. When an enemy is weakened, you can choose to finish it off by pressing the grab and initiating a brief QTE, which risks replenishing the enemy’s health if you fail.

The QTE finishers are fun at first, but they only vary between enemies, so you’ll often find yourself sitting through the same animation time and time again. It can also be hard to initiate the QTE, as you need to wait for a small target reticule to appear on an enemy first, and this can make it very difficult to properly finish, for example, the sorcerer monsters that hover in the air and thus can keep out of range, despite being ready for death. 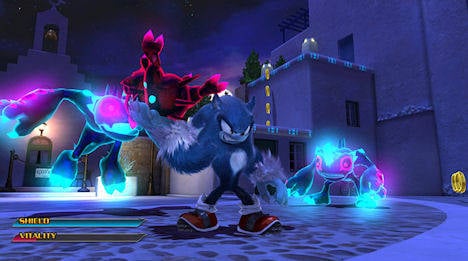 In between fights, you will be mimicking Ubisoft’s Prince as Sonic sidles along ledges, teeters across thin beams, jumps from upright pillars or swings from poles. There is also a very simple “find object X and put in slot Y” activity during the demo, too. It will be familiar to any PoP fan, but if there is one thing Unleashed isn’t pretending to be, it’s innovative.

The demo ends with a big boss battle, which was tricky thanks to hard-to-judge attacks and a mass of enemies that distract you. The boss fight, and various other instances of combat in the displayed stage, can be quite huge, pitting Sonic against a vast slew of enemies. Luckily, the combat is mostly tight, even if your attacks can’t be easily corrected if you miss an enemy. Foes can be a bit merciless too, but it’s certainly not a very difficult game.

I only played two levels, and there is no telling if the amount of polish applied to the ones presented has been spread across the entire game with equal generosity. What I can tell you now, however, is that if Sonic Unleashed is able to keep up the unimaginative but fun gameplay I got to experience, we are about to see a console Sonic game that does not suck.

And that’s as close to megaton as you get!