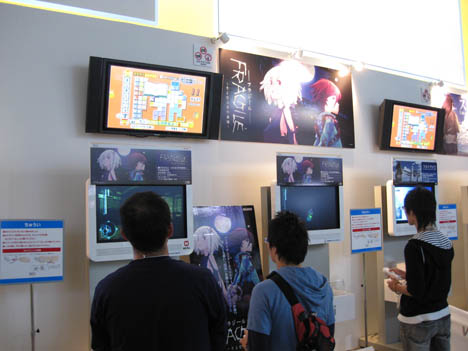 So good. So pretty.

I figured I would just get to the point. Destructoid’s readers and editors have been keeping a close eye on this amazing looking Namco Bandai RPG for the Wii. I finally had a chance to get my hands on it here at TGS 2008. While my time with it was very limited, I can say that the experience was definitely promising, and it’s something worth looking forward to.

To be honest, I did pay much attention to the fact that Fragile was an RPG at first. We’ve heard the phrase “ruin exploration” thrown around in the past, and so I was more focused on that. Now that I’ve played it, I’ve seen that Fragile has role-playing elements, but I’m not sure of how deep it actually becomes.

Our demo started out in a shady forest area, where light beams hit the ground through the trees. Again, this game is visually impressive.  The Wii Remote acts as a flashlight. Using it, I was able to find my way out of the tree cover by pointing it into dark corners and moving forward. A bright point on the screen marks the center of the flashlight beam, which is really the Wii Remote’s cursor. When it’s aimed at the ground, it puts out a pretty realistic looking circle of light.

I made my way out the trees to sunlight and eventually found a courtyard that led to an abandoned hotel. The doors were boarded and some windows broken. Inside, walls and surfaces looked old and dusty. The weathered look of the walls reminded me of the visuals in the PS2 Silent Hill titles. Boxes and trash were strewn about, and everything was dark and grimy. I was able to shine my flashlight and look hotel rooms, storerooms, and lobbies, all of them rendered in fantastic detail.

There’s ghosts in this hotel. Small and wispy, they’re not anything scary at first. I was able to take them out by swatting them with a stick or golf club, both controlled by button presses. Fragile battles take place in real time. Taking ghosts out isn’t difficult, and the battle system isn’t very complex, but I don’t think it’s supposed to be. It seems the focus is on exploring, so these early ghosts are just a hindrance.  It was just a matter of swatting at them until they disappeared, doing your best to move about and avoid their attacks.

Later, a larger apparition took some swatting to take down. A large, freaky mask appeared, took a hit or two and disappeared again, only to teleport to another place. It was here that the moving and swatting seemed a bit clunky. Moving, facing the right direction, and then swatting seemed a bit rough, but the game isn’t finished yet, and I hope this is something that will be polished up by release.

When you are hit by an enemy, your hit points decrease in number. When you hit them, a damage number appears. Unfortunately, aside from hit points and some item screens, we’re not sure how much role-playing is in this RPG. On top of that, our playthrough gave very little indication of the story or setting.

The build of Fragile that we managed to play is about 80% finished according to Namco Bandai. Even in its unfinished state, this game looks fantastic. It’s dark and stylistic, and definitely not like your typical Wii game. If this is an RPG, we’re going to call it an Action RPG — and that’s totally fine by us. The setting and art alone make for something unique and appealing, which makes us pretty sure that this will be released abroad sometime in the future.