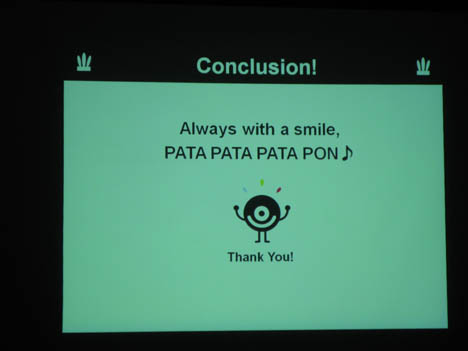 This morning Sony invited us to a closed-door event to take a peek at Patapon 2: Donchaka, the upcoming sequel to the PSP rhythmic god game.

In Patapon 2, the Patapon hit the water, taking a ship to see what’s out beyond the end of the land. They happen upon an unknown island that they intend to explore, but are soon blocked by a clan of masked beings called Karman.

Sony listened to Patapon fans’ requests from the first title, and did their best to incorporate new features that would make those gamers happy. Because of this, Patapon 2 will include repeatable missions, customizations, the ability to create original Patapon and much more.

The highlight of the presentation was a demonstration of the new 4-player multiplayer feature of Patapon 2. I was able to join in a multiplayer game with director Hiroyuki Kotani and two other press members. Here we saw and played as new types of Patapon, including a robotic one called Robopon and a magic user named Mahopon. I played as a bird rider named Toripon.

We each followed the lead of the Hero Patapon, controlled by Kotani. Just like in the single player game, each player has to tap in rhythms in perfect time to move forward and attack. It took us a few minutes to get in sync, but once we finally did, we were able to proceed and take on a series of sub-bosses and finally acquire something called a Mask Egg.

Once a group acquires a Mask Egg, a rhythm minigame is unlocked. Each character has to perfectly follow a question-and-answer set of musical phrases together to crack the egg open and get the Hero Mask. The phrases from this rhythm minigame range from aural cues to side scrolling (think Taiko Drum Master) visual ones.

The good news is that this multiplayer function only requires one of the four players to own Patapon 2. The multiplayer quest and the rhythm game are both simple fun. It’s the type of game that anyone can pick up and learn quickly. Kotani hopes that this easy gameplay and simple sharing mode will help Patapon 2 become popular among gamers’ friends and family.

Patapon 2 is a serious upgrade from its predecessor, bringing over twice the content to the table. There are now 7 minigames, 9 unit types, 23 huge bosses, 48 types of rare patapon, over 500 items, and over 80 missions.

Of course, Patapon 2 is a given for Patapon fans, but this simple and accessible multiplayer may help build an audience for for this underappreciated franchise.