With some seven months of development left in the title, Sucker Punch’s Infamous is looking damned good. Sony and Sucker Punch showed off the PlayStation 3-exclusive modern-day superhero title off to press behind closed doors today, and I walked away more than impressed by what I saw.

For the uninitiated, here’s the deal: after a cataclysmic event that leaves the fictional Empire City torn, Infamous puts players in the shoes of Cole, a regular dude mysteriously endowed with superpowers. The game follows Cole as he becomes accustomed to using his electricity-based abilities in an open world ready for gamers to explore.

Hit the jump for some first impressions of a new area and mission Sucker Punch showed us, as well as details on one of Cole’s newly-revealed abilities, Post Cognition. 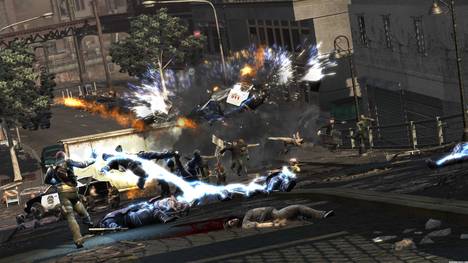 As an electricity-based superhero, Cole will never be using a gun. Unfortunately, with his power, holding a metal-based weapon would be, well … disastrous. But playing the game, you shouldn’t miss all of the flying lead; one of Sucker Punch’s goals is to make his powers feel as good — if not better — than using a pistol in a game like Call of Duty 4.

Many of Cole’s attacks will include using bolts of lightning to take out his opponents, but that doesn’t necessarily mean targeting them directly. In the demo we saw, Cole fired quick bolts at objects in the environment — cars, light poles, and more — which would chain with one another, eventually shocking an enemy target. Sucker Punch showed us one particular area to show this off, the Electric Empire, a contained area with an electric transformer and other metal objects.

The on-screen action is wild — enemies are sent flying through the air, and the environment sparks and explodes as Cole’s electricity charges and tosses objects. It will be possible to continually charge an automobile to the point of explosion, flames shooting up in all directions, taking out anything in its path. 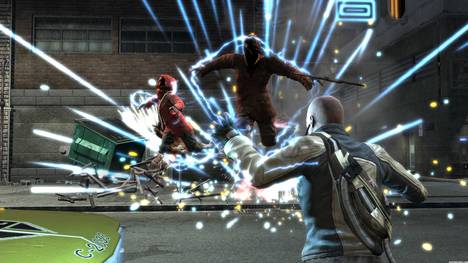 Cole is also adept at climbing and parkour — think Ubisoft’s Prince of Persia in an urban setting. If you can see it, it’s likely that you can climb it. Cole effortlessly hoists himself up a light pole, wiggling his way to the top and perching himself on it. Buildings can be scaled as well, and Cole can utilize window sills and pipes to hoist himself up. In a demonstration of how the environment can be used, Cole zaps a steel tower that cracks at the base, dropping down to reveal a way to the next rooftop.

Sucker Punch also demonstrated that Cole’s electrical abilities aren’t limited to offense. In one scene, Cole discovers a new ability, Post Cognition, which he uses to tap into the electro-magnetic impulses of a citizen’s brain. By doing so, he’s able to essentially read her mind, replaying a scene of her husband being kidnapped by the game’s enemies, the Reapers. The ability produces a green ghost that can be accessed by pressing L3; this ghost leads Cole to the kidnappers, advancing the mission.

Disappointingly, Sucker Punch aren’t letting us get our hands on the game yet, so there are still a lot of unanswered questions. For one, while the action looks incredibly hot on screen (so far, it’s not a stretch to say that this may be the best looking open-world game this generation), how it feels to control Cole is going to be key. The demo showed off a lot of cool-looking vertical combat — quickly climbing areas to get the upper-hand, for instance — but if latching Cole to a pole or ledge is more difficult than it looks, this could be more of a chore than anything else. 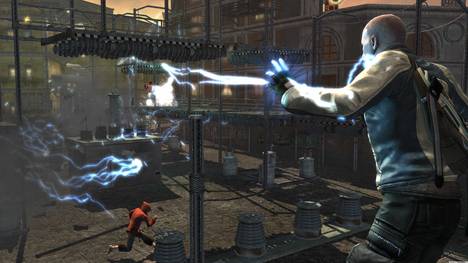 There’s also the issue of morality, the “good versus evil” choices Cole will be able to make. Sucker Punch demoed how it would affect the game’s open-world civilians by zapping an innocent bystander, which scared off crowds who were hesitant to get in your way. Decisions like this will not only change how the world reacts to you, but how the world looks, and what powers you can develop. This could add an interesting layer of gameplay to Infamous, but these choices run the risk of feeling forced and artificial. We look forward to seeing Sucker Punch demonstrate the broader impact of different choices you can make as Cole.

Without a doubt, Infamous looks to be a far cry from Sucker Punch’s Sly Cooper titles, but is looking every bit as polished and unique. We’re definitely interested in seeing more as we lead up to Infamous‘ 2009 release.