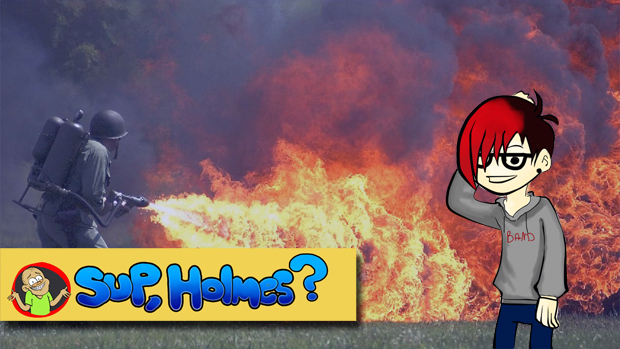 [Destructoid’s Director of Communications Hamza Aziz asked Jonathan Holmes to make a show called ‘Sup, Holmes?‘ so that Destructoid could later sell a t-shirt that says ‘Sup, Holmes?’ on it. This is that show. Subscribe to the podcast feed and find more episodes here.]

Sorry for the bad sound this week! I did a bit of yelling because Zoe Quinn dropped so many bombs on me. She’s cultivated a program that encourages women to become game developers. She’s the designer of a fighting game that uses REAL FLAMETHROWERS. She’s working to make the text adventure relevant again. It’s hard not to get loud when someone is doing so many incredible things at once.

Tune in next Sunday at 1pm PST/4pm EST (either here on front page or on our Twitch channel) for our next live stream podcast where we talk to Damian Sommer about his weird ass games. It will be fun for all.