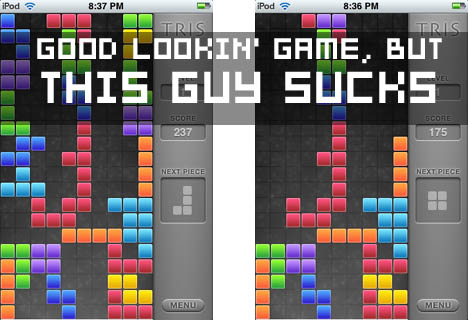 There’s Tetris clones everywhere, right? Well, not on iTunes. The free clone Tris is being pulled after its creator found out that the The Tetris Company isn’t digging his version.

Noah Witherspoon, the free game’s creator, received a letter from Apple, who passed the word along from The Tetris Company. They told Witherspoon that he should either settle the “dispute” on his own or face legal action, according to Opposable Thumbs.

“The trouble is, I’m a college student, and not an affluent one,” Witherspoon wrote on his blog, “and I simply do not have the time, energy, or resources to fight this battle right now. There’s a point at which I am willing to give up and be practical, to let the world have its way with that ever-mistreated little ideal of ‘principle’.”

While Witherspoon is backing down, he’s not giving up. He says, “when I have the time and can find a good copyright lawyer, I’ll be figuring out exactly what my position is and how I can make Tris available again.”

Now the only alternative is a pay version, EA Mobile’s Tetris, for $9.99.