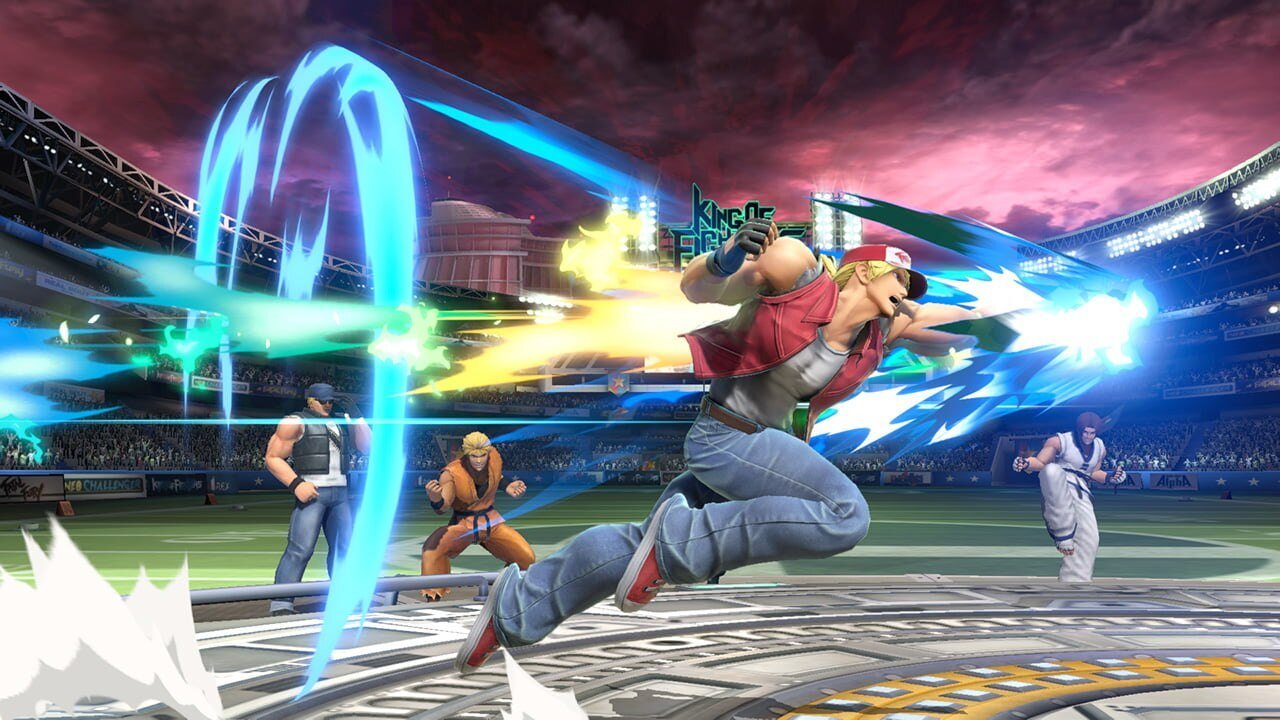 How many of these article subtitles are ‘Are you okay?!’ All of them

“Is Smash Bros. a fighter?” has been the “are games art?” of the last 20 years or so, but when we’re at the point where Smash is headlining EVO, you know you’ve made it.

Ryu and Ken also gave us a glimpse at just how much traditional fighting games have influenced the series, and now with Fatal Fury‘s Terry in the mix, it’s even more evident.

Fatal Fury was my first fighting game, though Terry wasn’t my first character! That honor goes to his brother Andy, who I’ve basically never used since. Poor Andy.

Over time I gravitated toward Terry (and Joe), who stuck with me all this time through crossover after crossover. I’m talking King of Fighters, Capcom vs. SNK, SNK Heroines, Fighting EX Layer: you name it. Terry’s kit is complete muscle memory at this point. So when I found out that you can use traditional fighting game inputs to trigger Terry’s special moves in Smash Ultimate, I was even more floored to try him out.

If you want you can choose to play Terry like a typical Smash character, directional inputs and special button and all. His side special is burning knuckle and crack shoot (forward/backward respectively), his up special is rising tackle (anti-air), down is power dunk and neutral is power wave (his core projectile). It has pretty much everything you’d want, albeit with limitations, as Terry is equipped to handle most situations that the rest of the cast throws at him.

At critical health (more than 100% in stock or 1/3 of his stamina) he queues up better versions of power wave (power geyser) and burn knuckle (buster wolf), which even have their own super commands. His Final Smash (triple wolf) can also hit multiple enemies at first, but primarily rips apart one person: it rules, as most Final Smash moves tend to just favor the latter. It was crazy how quickly I acclimated to Terry having played him nearly every year for 20 years. His rising tackle command (hold down, press up/attack, just like Guile’s flash kick) actually worked, which is the exact point where I knew I was in for a wild ride.

Terry is also super fast, sporting very quick dashes and a general sense of speed. It allows players to really up their footsies tech (“not a fighting game!”) and really bait people into punishes. Further delineation with quicker or firmer presses (just like an SNK or Capcom game) is even more proof that Sakurai and his team went the extra mile for this appearance.

His stage, on the other hand (King of Fighters Stadium), is fine. The background characters are cute, as is the idea that different songs will play based on who shows up (more on that in a second), but there’s no shortage of Omega layouts in Smash Ultimate. I’m glad it’s there, and it’s way better than giving us a convoluted mess that would throw a wrench in the random stage setting, but it’s fine at best.

The music selection on the other hand, whoa doggie. Sakurai claims that his team provided SNK with 49 songs to choose from, thinking they’d narrow it down to 10 or so, but they approved all of the proposals. As a result there are 49 new songs that come with this Terry DLC, which is absolutely insane and one of the only cases in 2019 of a publisher over-delivering on previously announced paid DLC. SNK has such a long and storied history, and if this is how people are going to respect it, even outside of the bounds of Terry, so be it.

I can’t believe Nintendo is four for four on paid DLC (five if you count Piranha Plant). Can we go for a hat trick plus two? We’ll likely see sometime in 2020. For now, we have Ken with a hat.