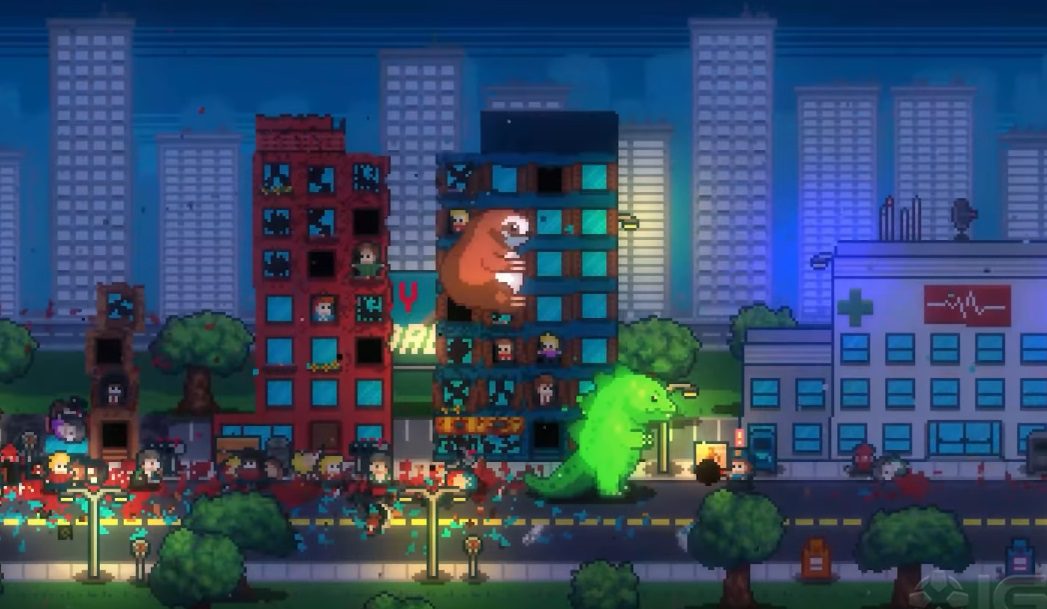 The spirit of Rampage returns in 2022

Among the wide array of indie hits shown off during Thursday’s Gamescom indie games stream, a lot of viewers found comically grim joy in Digerati’s Kaiju-loving smash-’em-up, Terror of Hemasaurus, which is currently in development for a scheduled early 2022 release on PlayStation, Xbox, PC, and Nintendo Switch platforms. Check out IGN’s trailer below.

Of course, to any viewer of a certain age, Terror of Hemasaurus immediately recalls the cartoonish, city-wide carnage of Taito’s legendary series Rampage, as giant monsters lay waste to the buildings, streets, vehicles, and people of some hapless metropolis. Developed by Super Blood Hockey‘s Loren Lemcke, Terror of Hemasaurus has a twisted ecological theme, as a quartet of creatures chomp their way through the planet in an effort to reduce the populace’s increasing damage toward their environment. Of course, Godzilla himself was also originally designed as a statement against man’s inhumanity to Mother Earth, so the apocalyptic plotline of Lemcke’s latest is a surprisingly snug fit.

Whether doing the stomp as the Clocksloth, Salamandrah, Autonomous, or the titular Hemasaurus, up to four players can enjoy co-op carnage as they topple skyscrapers, fend off attackers, devastate the landscape, and munch their way through the local citizenship. Various stages and challenges await to offer up cathartic destruction and solid doses of good, old-fashioned, city-smashing fun. Worship at the Church of the Holy Lizard when Terror of Hemasaurus is finally let loose on PS4, PS5, PC, Xbox One, Xbox Series X, and Nintendo Switch in 2022.